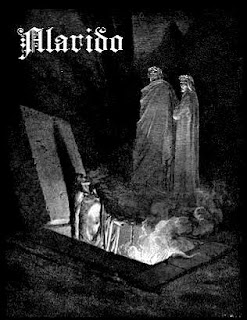 Alarido is an anomalous arctic blast, ravaging the sun-smitten Nevada desert landscape. The band's first cassette is a three-part odyssey of what Painajainen calls "crust/d-beat with black metal influences," and that sums it up as well as any label could. What he's too modest to say is that this tape completely rules. What turns out to be nineteen minutes of music, seems like only five, as the band seamlessly navigates through violent blizzards of blast-beats, searing d-beat siroccos, and the occasional rest on an inland sea of acoustic tranquility. You definitely don't want to miss this one, or the next tape which is in the works.
Buy the first cassette here
Download here
Posted by Batguano at 9:21 PM

awww shucks thank you for the kind words! email me your address and I'll send you a tape.

btw the first comment was mine but i didnt realize i was on my grown up looking for work email account haha.

He he, don't worry, your secret is safe with me!

Anywho, the pleasure was all mine on this one. I'd love to have a hard copy, so I'll get in touch shortly. Good luck on the job search...