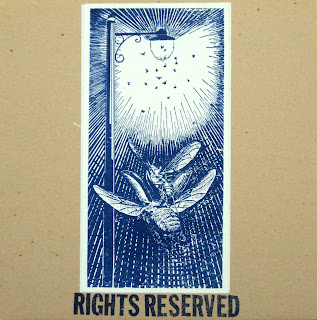 Besides sludge, melodic punk, and the newest releases and reissues I've grabbed, vacations always send my musical choices in one final direction-- an often inebriated amble through the gleaming boardwalks of nostalgia.  As my musical coming of age was in the nineties, it's not surprising that I should reunite with some Rights Reserved records this summer, a band with whom I made an instant connection so many years ago (first exposure was the Assfactor 4 split).  The problem of genre is only a problem if one obsesses over it.  If you're one of those, I'd say for a brief moment RR may have been called hardcore, in the same way Kerosene 454 was.  Which is to say that in retrospect... they were not really that.  The band, in their closing statement of the liner notes, chooses the self-deprecating "crappy rock" tag, which if you take time to read the lyrics, they seem like the types that would say that.  I will gladly settle on indie rock/punk with a definite DC/Maryland feel.  What brought instant camaraderie between me and RR's rock was the honest, confrontational, and ultimately cathartic way they handled the often overlooked, but extremely frightening dilemma of young adulthood.  We come barreling out into the real world like a second birth, knowing everything and sneering at the masses who of course have it all wrong, ready to conquer the world, only to be repeatedly tripped up by the baggage of our past, and clothes-lined by our arrogance and ignorance.  The boys in Rights Reserved, jaded before their time, knew this I think.  Maybe they even understood how crucial those pitfalls would be in making us who we are.  I can't say for sure, as the LP posted below was their last testament as a band.  It's a bitter pill to swallow, but this band's tough love will get it down your gullet one way or another.

A Rights Reserved EPs post should make it here before too long.
Posted by Batguano at 2:35 PM 5 comments: 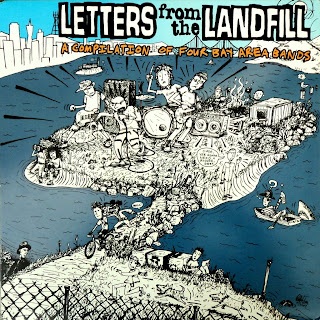 I guess every compilation post should start with a disclaimer: the story is I heard about a band that featured members of Filth, Dystopia, and Fields of Shit.  They were called Abandon, and their only output were the five tracks on the "Letters from the Landfill" comp.  Abandon made music for the early days of summer-- a desperate outpouring of pent-up angst to be heard while sitting under that blazing yellow disk in the sky, fighting hopelessly to get through the haze .  Don't expect the sludgiest, crustiest thing to ever come out of the Bay Area; in fact I recommend that you to recalibrate before taking a listen.   These guys were more about ambiance driven by fairly lightly distorted guitar and syncopated drums, navigated by the unmistakable vocals of Mr. Jake Sayles.   As a  first release, I would have been all excited to hear what Abandon would do next, but we all know what happened (or didn't).  The rest of the comp has its moments.  The big moment for me was discovering This Is My Fist.  I'm not sure how I've avoided them for this long, but their abrasive, yet melodic punk tunes had me checking their discog page but quick.  From track to track, I detect a little bit of all those things I like in bands like Lost World, Preying Hands, Burning Kitchen, Zeitgeist... difficult to nail, but completely rad.  The other two bands have to catch me when I'm in the mood.  Shotwell and Peels each play their own kind of indie/punk/progressive rock that is silly, smart, and serious depending on which track or movement you're hearing. Good stuff; just now always my thing.

"Letters from the Landfill" Compilation (Left Off the Dial Records, 2003)

Shit, where does the time go?!  I think I finally found the motivation (and some records) to get this thing going again.  Meantime, keep the requests coming.

Re-ups:
Seven Foot Spleen
Spine Wrench- also... if you want free Spine Wrench vinyl, check out Mid's comment on this post and get in touch with him.
Multi-Facet/Sheephead Split
Posted by Batguano at 5:50 PM 5 comments: