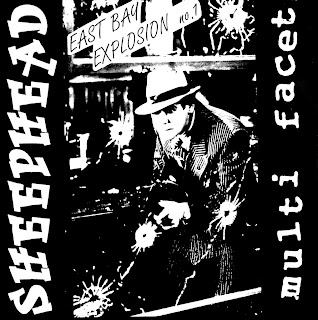 I'm playing hooky today, and the day wouldn't feel complete without doing something naughty, like doing a post when I'm too "sick" to work. This naughty little post also signals the end of a year and a half long search for Multi Facet's split 7" (with Sheephead, I found out...). When I posted the Zero Hour 7" two summers ago, a kind commenter mentioned this mysterious platter. I've since posted the band's other output, but it's time to bookend this mofo! Multi Facet were a mere blip of flatulence in the mid-nineties Bay Area hardcore "scene," but they were a loud and well placed one! Their approach was fairly straight forward, but accented with the playful of bass doodling and dark ambiance of Econochrist and the "post- Econochrist" bands in their neighborhood. And, with Jenean (Ojorojo) on vocals, this band could have been unstoppable; unfortunately the eight tracks posted on this site are all they released on vinyl. A belated RIP to an awesome band... enjoy the legacy (link below).

Sheephead, on the other side, played poppy punk like Crimpshrine or Fifteen, but with high fructose corn syrup added. It's catchy and fun, but they aren't much different than much of the pop hordes coming out of that time and place. Think of it as the Prozac to battle the depression Multi Facet will leave you with.

The split
Posted by Batguano at 9:06 AM

holy shit, thanks so much!

i want more sheephead, You got anymore?..

Many thanks for this. Multi Facet used to have a demo posted on their Myspace page. I'll be damned if I can find it though.

It's back up now. Check the new link. Thanks.

Would it be possible to re-up this?

I had it, loved it, but lost it in a recent digital catastrophe.

Any help would be beyond appreciated.

Hey there... sorry about your crash. I updated the link. Also sorry for the delay in getting back to you. Let me know if I can help you out with anything else.

Hey, thanks so much!

I was really missing those Multi Facet tracks... It's great to have them back.

(And no worries about the delay, if you could even call it that :) I felt bad for pestering you about a re-up.)

Your work on this site is appreciated. Thanks again.

hi! thanks for your blog! it's reaaally good and thanks to you i've know amazing bands like ZERO HOUR, APEFACE, MULTI FACET, OJOROJO...
but i'm late for this link to the SHEEPHEAD / MULTI FACET split... please, could you re-upload it?
thanks so much guy!!