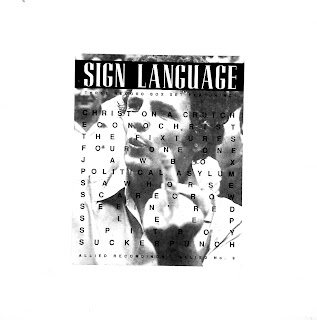 I've got another artifact here from the time when extreme idealism was prerequisite for starting a hardcore band or label. "Sign Language" was a triple 7" box set compilation Allied Recordings put out in the early '90's. According to his blurb, Yates liked the result but hated the process of assembling this thing. Like many contemporaneous comps, it includes a ton of graphics and writing, and fairly diverse selection of music (for similar comps, go here and here). Most of the standout bands' material would be compiled elsewhere in later years, but this is a pretty awesome line-up in an equally awesome package. (Note: the records were mastered at a really low volume, so you'll have to crank up your stereo for this one).

another great post of an early 90s compilation. i had actually forgotten about this one. thanks for the reminder.

Do you know if Scarecrow ever released anything else?

Sorry for the delay in getting back to you. I want to say yes, they did, but that's conjecture at this point. I start searching and if I score I post it right away!

Thanks ACE! I was looking all over for Scarecrow; didn't know Strawman was the same band, but it makes sense. Thank you!