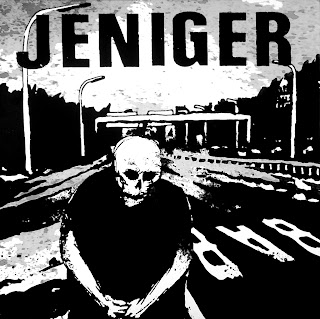 Sorry if the Jeniger LP has been posted elsewhere, but really it was just a matter of time before it appeared on this blog. Around the time of the demise of His Hero Is Gone, the plague of morbid brutality had already spread out of control globally. Every band and their little sister was overcome with the need to play their hardcore dark and heavy, and to work that chilling thread of melody into the barrage of pure destruction. Predictably, some of these second wavers were fairly incredible, Germany's Jeniger being one of the sneakier and deadlier examples of this elite strain. There's an overall sense of bleak minimalism dominating the songwriting, which is perfect because a sound informed by such raw emotion shouldn't try too hard to dazzle or distract from its own impact. The aptly named opening track, "Point Of No Return," should be enough to lure you into the band's desperate world, if not from the throbbing, distorted opening bass riff, then certainly from the mesmerizing drum march that follows. After that, there really is no turning back.

Hey thanks! You've given me a much needed morale boost :)

This one is THE killer!
Always loved Jeniger since I first got to hear their 12". I've been hunting for those 7"s they made, but with no luck...

Yeah the LP rules hard! I found a copy of the Ebola split at a local shop for cheap (score!) recently and I noticed Yellow Dog Recs has a copy in their distro (I don't suppose you live in Europe?). Otherwise, Am I Mean? and 7 Inch Crust posted them a while back (but you probably knew that...).

Hey, thanx for a tip! I'll try Yellow Dog. And yes I live in europe... I have all those 7"s and a demo tape on cdr, so I can listen to them, but a little materialistic in me wants them in an original form also :D

It's all set to go now. Thanks again.

Many thanks for re-uploading this. Absolute killer LP. This BLOG right here RULES. High quality rips with scans included. Keep up the good work mate.