Worth A Thousand Dark Words 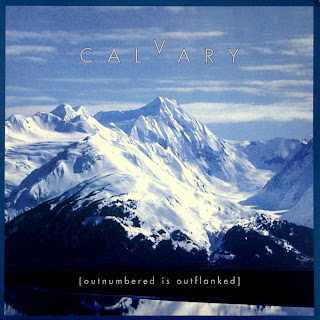 Something to sweeten your palate here after the bitter pill of the last post. Calvary was total Rites Of Spring worship brought to you by Matt Weeks (and others), perhaps recognizable as the man behind Council Records and co-conspirator in Ottawa, Nema, Current, and Dearborn SS. From that intro, you should already know whether you'd be interested in Calvary or not. "Outnumbered Is Outflanked" surfaced when Council Records grew new roots in Chicago in the early 2000's, and stands as the band's only full length. The tempos are upbeat, but the guitar lines never get too dramatic and the melodies never get past the courting stage with pop. Just 12 tracks of the good late eighties style DC rock, but with its own distinctive character. 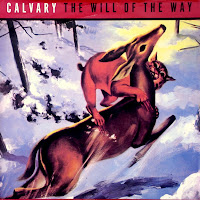 And, since there's room, why not throw in Calvary's follow-up 7"? At least two of the three tracks rock, especially the title track, which comes complete with a melodica intro! These two waxen slabs are all I've come across from the band, so if you know of more, don't hold out on me.

Thanks for this! I just have one thing to point out though. For 12 seconds, starting at the 24 second mark of the track Torrential there is some serious Cheap Trick influence happening. It totally sounds like Oh Claire (http://www.youtube.com/watch?v=nEaaKSAVNCc)...except a bit more rockin'.

Mr. Lardass- I totally never would have made that connection... You have an excellent ear, thanks!

good stuff,
clearly influenced by rites of spring but catchy...the voice reminds me of mike kirsch a bit...
thanks for that post.

You're totally welcome! I agree completely with what you said. I think if these guys would've stuck around for another album, they might've really turned some heads.