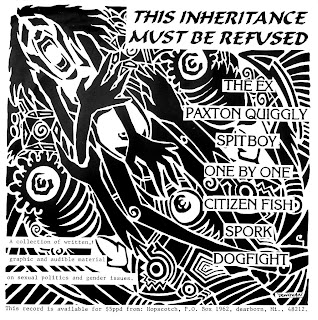 Depending on the way you experienced the nineties, this compilation represents either everything significant, or everything that sucked about that decade. "This Inheritance Must Be Refused" showcases a wide assortment of bands, artists, and writers of yester-decade who had something to say about gender politics. I have a soft spot for this era, and as whiny and "PC" as some lyrics and zines were, I find myself marveling at the experimentation that went on, as well as the almost obsessive DIY effort that went into many releases. That mania is ever-apparent on this one-sided 12" both musically and in the layout and content of the booklet (see scans uploaded below). As far as the bands go, this comp is worth the download simply because there's a One By One track on it, but Citizen Fish fans and Spitboy completists have a reason to get excited too! (The spoken-style vocals on Spitboy's track are a little unnerving, but I guess that's the point?!). An interesting, if inconsistent listen, and a quintessential artifact of a fast-fleeting moment in our history.

Labels: Compilations, Dogfight, hardcore, One By One, punk, Spitboy

finding this album online has made my week. i have a copy of the vinyl in storage across the country, and haven't heard it in years. this comp is by no means the greatest, but there are some good tracks, and it takes me back to a certain time, as you wrote. i used to know the guy who put this album out. a relative of his died, and left him some money. he used it to put out this record, hence the title. thank you much for posting it.