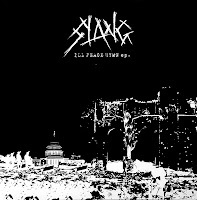 Slang is yet another Japanese band whose die hard spirit inspires the heck out of me. 2008 marks their 20th anniversary as a band, and in celebration they've released a slew of recordings, including the three 7"s posted here, and a new LP, "The Immortal Sin." 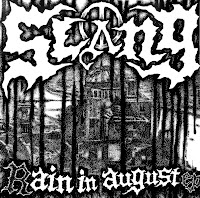 The three EPs-- "Ill Peace Hymn," "Rain In August," and "Amid The Raw Pain," were released in one-time pressings of 500 by three of the more well respected labels in Japanese hardcore (MCR Company, Blood Sucker, and H:G Fact Records respectively). Each beautifully represents the newer Slang spin on traditional Japanese hardcore, which is also what you can expect from the LP. Fans of Gauze and Death Side won't be disappointed, but if you loved the NYHC influence of "Skilled Rhythm Kills," the new Slang may take some getting used to. After a while though, there will be no denying that this band can do no wrong. 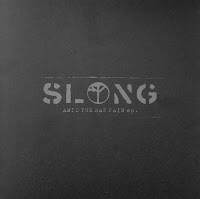 Three of the tracks can be found on "The Immortal Sin," but the b-sides, I believe, are only available on these little gems. Themes deal with the usual topics of war and the destruction caused by imperial aggression, with an extra emphasis on "Rain In August" toward the H-bombing of Hiroshima. Powerful stuff, and if you don't believe it, check out the powerhouse over there in the singingbox. And of course, don't forget to visit Hardcore Holocaust distro to fill up on Slang tunes.

I didn't even know that this was exactly what I wanted to listen to today.

I really enjoyed you page.
You are so creative!!
THANXXX!

Thanks for the comments guys (and girl)!

Thanks for this! I love the artwork for the rain in august ep, classic japanese style.

Yeah, that cover was done by the one and only Sugi, who did covers for the Gudon discog., the Desolation LP, and whole bunch of other gems. His style is definitely singular and awesome!