For When Life Is A Toilet... 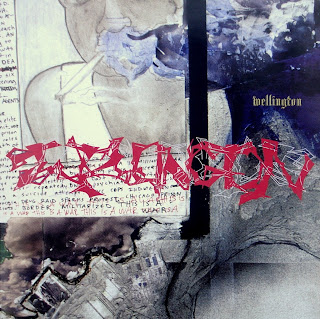 Mike was interested in seeing some Wellington posted here; more than happy to oblige! The only reason I hadn't done so already was the possibility that their discography CD may still be in print, so this may be one of those limited-time-only downloads. So who the fludge was Wellington, you ask? Yeah, they were a little overlooked during their time, but not for any good reason. Historically, they were the primordial slurry that would one day ossify into Unruh. But let's get back to the topic at hand: Wellington played scathing sludge metal that could only be produced by the clinically depressed. Their guitar sound had all the subtlety of a rusty, runaway saw blade, the power of which seemed to disguise the fact that they were merely a trio. The longer tracks make good use of space at certain points, allowing the bass to come forward and lull us before the next attack. This tactic does wonders to enhance the power of the heavy parts, but those chilling, quiet junctures really add a compelling demension to the writing. Perfect music to stalk by, but if you're on any kind of medication, I wouldn't recommend listening to it all at once.

As I said, Deep Six supposedly has copies of the Discography left (?) as does Ebullition Records (if you've got 100 ducats to spring for an order). It's totally worth it. The layout is nice, but unfortunately the script is a bit small and I don't have a working scanner. I went ahead and included pics of the LP ("Thank You Jesus") and the split with Noothgrush to compensate. I may have to remove the link soon so...

Having named so many of my new faves in your "listen if you like..." list, I'm excited for this one. It kicks off with menace and power. Thanks so much, and a great description!

Kills. And since you brought them up... Can we clone Dystopia? I know there is a sometimes staggering lack of originality in the HC/crust/doom /whatever genre. But if Dystopia isn't going to release anymore albums, or play anymore shows, then someone needs to study the fuck out of Human=Garbage, and put out a sequel. These guys aren't too far off, but the one thing about H=G that nobody has captured IMO, is the overwhelming heaviness of the amazing production. It's so crushing. And samples that weave in and out of the tracks. But still, it's clear, you can actually hear all of the instruments, AND the vocals... The word that comes to mind is: Cinematic. Don't believe me, sit in your car, listen to it all the way through as loud as you can, and tell me you don't feel like killing your boss, punching your landlord and then comitting 'suicide in blue'. But in a good way.

You don't have to convince me. "Human=Garbage" is an incomparable masterpiece. It's almost too effective at what it's trying to do. As good as it is, I can only listen to it in certain mindsets or else it starts to become emotionally invasive... it's that good! I like Dystopia's other work quite a bit too, but you're right, H=G is so seamlessly composed and fuckin' heavy!

thanks so much for this - it's been forever since i've heard it. the version of "please" from their 7" gives me chills in its greatness.
mike.

thanks for this upload. do you also happen to have the Uruk-Hai "Give Up On God" 7"? cheers!

ive been searching for unruh related bands on soulseek for months.
finally i have been pointed to your blog.
"please" is one of the most depressing songs my ears have been blessed to hear. my mind has officialy been blown and you sir are my hero.