The Lesser Of Two... 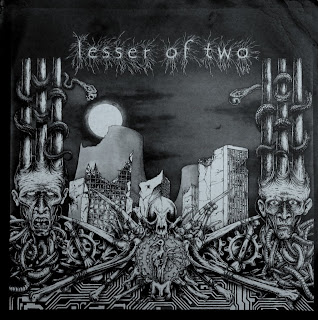 Is anyone else sick of hearing about the US presidential election? I thought so. Flip a coin when you turn on the radio-- will it be about the economic "catastrophe," or the election (catastrophe)? At least one of those topics of constant verbal diarrhea will expire soon...

Lesser Of Two's name just seemed appropriate for this time of the year, and since they also produced some baffling and insane hardcore/metal/crust (and I know you're lovin' the cover art!)... here's their self-titled LP on Malarie Records (2000). It seems increasingly hard to find any band presence on the web, so I'm assuming their material is out of print(?). According to the myspace of some members' current band, Embers, you can still obtain most of LOT's recordings through them. However, their official website lists nothing in the way of LOT merch. I don't know, I figure this band isn't really out to make money, but if anyone has a problem with me posting this just send an e-mail. So the music... Lesser Of Two played a manic style of crusty hardcore that sometimes treaded in psychedelic and/or doomy waters. The writing is unpredictable and the playing is tight as hell! The chaotic feel is only superficial, because these gentlemen and lady knew exactly what they were doing. No comparisons will quite do the trick, but ABC Diablo, Skaven, and early Burst (vocals) are the ones that come to mind. Check it out, and also check out Embers who are great as well (and hit them up for LOT CDs and whatnot).

Lesser Of Two
Posted by Batguano at 5:51 PM

They were great. Thanks for this.

hello and after a long time i say thanx not only for the introduction to this band. i love most of what you put on this blog, it´s my frequency, especially this bay area stuff. i guess you have the lesser of two cd war circus? if not i can give the link. anyway, thank youthankyouthankyoublabla ;)

by the way, the name is kc, not so anonymous , haha

Hey KC... I'm so happy that you dig the music. I don't have that CD, so if you could hook it up, that'd be great. I have their singles collection "Transmutation" which I hope to post soon.

is the link, plus artwork. i had the honor to see embers on the bob-fest in bremen in my country ;) germany, haha, together with a.d.t., fix my head, fracas and so many othwer nice bands, and gopt all the lot eps and cds. robi wan was too proud to attend, although he lives in this area, shame on him!!!

Well, I'll forgive Robi because he seems like a cool guy and has awesome taste in hardcore! So, the BOB fest... is that like a metal event?

Thanks for the link! When I post "Transmutation", I may include your link if that's Okay?!

yes, take the link. and robi is all right.

and bob fest a metal event? decide yourself ;)

bob means bremen oakland bath, cities linkes since the 80´s throug punk and hardcore and metal and whatnot. i was too ignorant to recognise this since the last year. they have a rotation of festival-organizing. every two years in one of the towns. next time should be oakland in 2011, i´m going to be there i hope.

Interesting about the Fest... Maybe I'll see you at the Oakland gig.

Hey, I really appreciate the rips too!

oh cool i used to have this, lost it long ago. my ex went on tour with them once, and came back with scabies. punk.