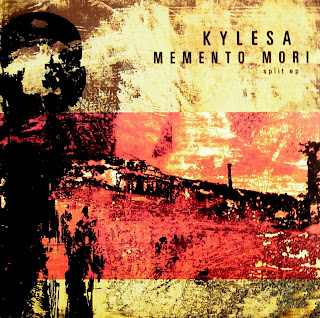 I've been listening to some Damad, Karst, and Institute lately, but the Kylesa stuff had been sitting dormant in my collection for quite some time. It's time for a little revisit. I started with an earlier release, back when they were at their heaviest-- their split with Memento Mori (Hyperrealist, 2002). Darn it, I still like Kylesa! "The New Normal" certainly lays waste to their newer material in the heaviosity department, although their last two albums excel in diversity of song writing. I'm busting out their first LP next...

Commenter Aboynamedstew reminded me of the awesomeness of Memento Mori a while back. This thrash-metal-hardcore band featured Michelle of Scrotum Grinder "fame" and were quite a force (albeit a short-lived one). MM start things off with an interesting and off-kilter instrumental acoustic track, and then rip you apart with a thrasher called "Dirt Roads And Howls Of Wolves." Damad's evilness comes to mind, as does the speed and further evil of Sacrilege (UK). A bit more bass in the mix would have really increased this band's menace, but they do fine with what they have.

These rips came out nice and loud, so...

Thanks, I love Kylesa.

thanks for this - mememto mori is too great for words. any chance you could post any wellington stuff?
cheers.
mike

Supposedly the Wellington discog CD is still in print, but I don't know if I believe that. Maybe I'll do a limited time download kind of thing (I've got the split with Noothgrush too, but I'm not sure there's any point in posting that).

Okay, you talked me into it...

awesome - looking forward to it.
mike.