Song(s) Of The Week: Leatherface Mix 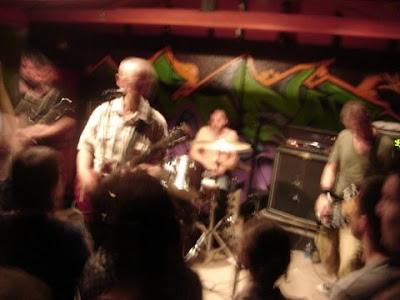 Two things sparked this post: 1) I fuckin' LOVE Leatherface! 2) I finally saw Leatherface live this summer and while I was having a religious experience of it, a large majority of the crowd (what I like to call the hair-style-of-the-week crew) was sitting OUTSIDE during the band's set (!), probably waiting for the flavor-of-the-week band that was to come on after. Since the late eighties, the UK's Leatherface have consistently (more or less) written some of the most driving, powerful, beautiful, sad, joyous punk in the history of that musical style. Although they have legions of reverent fans worldwide, my encounter with the pathetic enclave mentioned above leads me to believe there are a few unanointed, could-be Leatherface fans out there. For better or worse, the band influenced a ton and a half indie rock-via-punk bands like The Sainte Catherines and Hot Water Music, but I have yet to hear a band of this style as heart-breakingly powerful.

Seeing that it's impossible to choose only one Leatherface song, I've put together a mix of 10 favorites. That was still a hard task, so I limited myself to one track from each album, and a couple of singles selections. As usual, if you like what you hear, go to BYO Records and order some of the band's fine work. Their early LP, "Mush," is unanimously considered their opus, but you can't go wrong with any of their releases (especially "Fill You Boots," "Horsebox," "Cherry Knowle," and their split with Hot Water Music).

Link has been removed. Go to BYO or the Leatherface myspace.

nice mix! I miss my fave song Eagle but as Cover seem to count my #2 Hops and Barley is included!

b.t.w. Frank S. sold the guitar on which all the LEATHERFACE hits were written to the REVENGE guitarist cause he needed money for booze!

What a story! I didn't realize what Stubbs' true muse is. It all makes sense now. As far as "Eagle," that song always gets stuck in my head, big time. It was hard leaving off so many favorites, but it had to be done.

I made the cutoff before you got rid of the link. Well worth it my friend. Thanx as always. Are you still in Cali or did you make the pilgrimage north?

Unfortunately, I won't be able to move until the summer. Operation get-outta-here is underway, but only in the planning and amassing of cashola stage.