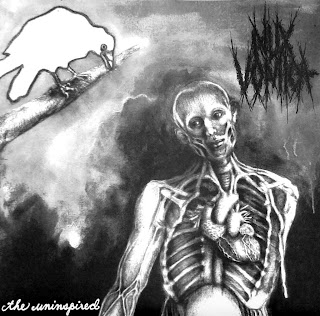 Based on the Song of the Week responses, this Nux Vomica 7", "The Uninspired," (Firestarter/Torture Garden Records, 2005) seemed so very appropriate. NV are based in my future home, Portland, but members have origins in Baltimore bands such as Wake Up On Fire. If you haven't heard this band, it's time to end the deprivation! In avoiding the term "neo-crust," I'll just say that they play an amazing mix of metal and crusty hardcore with epic and unpredictable songwriting, and frequent meanderings into darkly emotive and melodic territories. Theme-wise, the tracks touch on the way our culture discounts the opinion of the younger folks, extreme disaffection and its constructive possibilities, and the inconsistency between the words and actions of bands that preach revolution. Nux Vomica is easily one the more exciting bands in the American crust arena; their LP is great, their split with Kakistocracy is great, this 7".... great! They also recently released a split 12" with Wake Up On Fire which I assume is really great too! "The Uninspired" appears to be sold out almost everywhere, so hopefully the band doesn't mind that we...

excellent record, i have a copy of this and listened it again and again.
if i remember correct, NV are connected w Wake Up on Fire, don't they?

It's such a powerful record... one of my favorite 7 inchers in a while. Yes, they have members of WUOF (as mentioned). I finally got the split 12 inch and it's awesome!