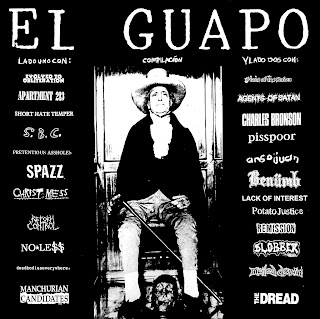 Apparently, the El Guapo Comp was a real pain in the ass to assemble and release, and well, it was only slightly easier to rip it! Regardless of these ripping complications (read more below), I felt that this comp was such a classic (for me at least) that I simply must post it. Being an early 625 "Productions" release, the conclusion seems foregone that several, if not all the post-Plutocracy bands will be represented (Spazz, No Less...).

The line-up in general is...
intimidating! Many of the who's who of mid-nineties "powerviolence" are in attendance, at varying levels of quality. I've spun this thing so many times since its release, a note on the sound quality may be in order.

Disclaimers: First of all, according to Hirax Max, pressing number one had shitty mastering (my copy-- pressing number one). Second, I was not always as near-retentive as I am now regarding my records. This one has been a casualty of neglect and it shows in the fuzz and crackle; not to mention the giant scratch which makes the first three tracks a little hard to listen to, and which led me to delete one between-song audio sample (many apologies). For the most part, though, this is one hell of a noisy comp, and sound quality isn't a huge factor. The final issue is the track tagging. The band SBC supposedly has five tracks, but it wasn't clear how they are divided. I decided just to combine them into one giant track. With regard to No Less's track, I had to guess at the title. And finally, for the track that appears between Pisspoor's and Ansojuan's, I just assumed (perhaps wrongly) that it was an unlisted Pisspoor track and tagged it as such. There's always a glimmer of hope that someone out there is more astute than me at this (comments are more than welcome).

So here it is... around 40 headache-inducers conveniently assembled for your listening joy/agony/hilarity.

I just found a track tag error. If you downloaded this yesterday, the third Spazz song is "Burning Tongue."