The Trigger Isn't Hard To Pull 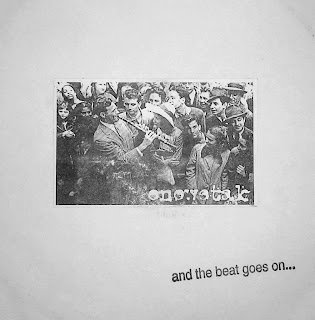 It had to happen. Pretty much every other Enewetak record has been posted here; it was just a matter of time before "And the Beat Goes On..." should make its appearance. I had some mediocre rips I had downloaded, and which seem to be consistently downloaded from me on soulseek. When I recently came across a mint copy of the wax, I knew I needed to step up. If I do say so myself, these rips came out pretty nice, and this record deserves the treatment. I think anyone into any kind of heavy music can get down with these nine crushing tracks of metalicious Rorschachery, and if you can't, well this is where we depart. As with the "Guns" LP, it just has to be heard, as descriptions will inevitably fall flaccid. And, as with all Enewetak LPs, it's my favorite until I throw on another one. But really I think this one might seriously be my favorite.

thanks for all the enewetak stuff! all i have is the "onward" cd and the unruh split, so it was nice to fill in the gaps. and if it hasn't been said before, the 320 rips are much appreciated!

Hey man, feedback like this really helps me know what to post in the future and whether or not past posts were all in vain. I appreciate it! Enjoy!