The Losable Way I Should Go 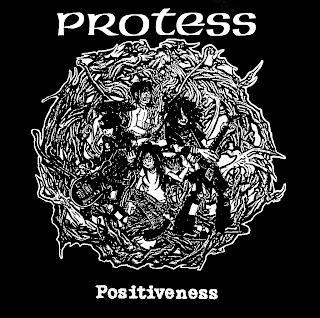 Well, I managed to get over a few humps in life in order to return here today, and also managed to allay a nagging, subcutaneous desire to stop the blogging biz. Toward the end, actually, I really started looking forward to posting again. I wouldn't call it a blogging addiction, but if it was, it would be like a coffee habit. When you stop, there's no heavy withdrawals (for me), there's even a sense of relief after a while; but then there's a definite feeling that something's missing; then the smell arouses the old monster again, and it's back to business as usual. Or maybe I just really like sharing music with the few of you out there who like this shit too. Either way, I'm back, and today we ease into the resurrection with a small but satisfying gem.

It was with their split with Signal Lost that I first encountered Protess, but it's still their track on the Noise Pollution split that holds the key to the band's brilliance. Their two track 7", "Positiveness" is no sloucher either, harnessing the dark and scathing crustiness of latter mentioned split, with only a hint of the rock chord-age of the former. Fans of Unhinged and Daymare (such as myself) will do backflips over this stuff, and then'll go searching Ebay for the LP that the band unfortunately will probably never record.

A big thanks to blog-meister and all around stand-up dude, Chairmaker for sending me rips of this 7" to hold me over. After scouring the bins, I found a hard copy and ripped it for us all.

Just like coming back to school or the office after a long break, I realize... I've got a lot to do here. An update on what I've been listening to should come soon (as if anyone cares), as well as posts I've been meaning to do on bands like Absinthe, The Neighbors, The Obliterated, etc. Thanks to everyone for sticking with, and for all the great blogs for doing great work and hopefully loving it! Mass visitations are forthcoming.
Posted by Batguano at 10:57 AM

Passing up on downloading Japanese punk would be like a deadly sin or something of the sort if anyone was actually capable of doing a deed so vile. Awesome that you're back an' all.

P.S. Well, I do post on cephalochromoscope, only not nearly as much as I used to. I try to atone every once in a while.

P.P.S. God knows where all the religious terminology is coming from and why.

Glad to see you're back posting, and thanks for the much better rip of Protess.

welcome back and wish you the best,and btw merry xmas :)

protess rules. have you heard the protess / signal lost? ruleage!

Ha!
Knew you'll be back.
Cheers

Hey! It's really great to see you guys here again! Thanks for the comments!

Jimmy, oh yes... I've got that 7" (two copies actually... not sure how that happened), and yes, both bands are total radness!

Welcome back, dawg! I've been itching to post again, myself. Shit, it inspires me to see you here. I look forward to your posts.

Geez Ry, I was starting to wonder if you were alright! Glad to know that you're alive! New posts at your blog? That'd kick ass. Hopefully it'll happen. If not, I hope life is treating well. Later on...