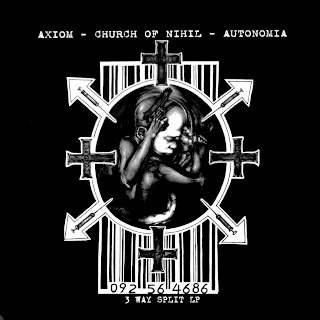 It's about time I pulled this blog out of the ICU. For a while I thought I might pull the plug on her once and for all, but it appears there's life in her yet. This blog wouldn't be what it is if it weren't offering some forgotten relic of the '90's, so on with it...

The Axiom/Church Of Nihil/Autonomia 3 Way Split LP is the darkest, dirtiest, worm-ridden filth at the bottom of the compost heap of its decade. As such, it was indeed overlooked by many, but was doubtless made of richer stuff. Axiom are a product of pre-Tragedy Portland, the roots of which quite obviously suckled the moist detritus of bands like Deprived and Resist, and grew heartily alongside North Westerners like Shitlist and Decrepit. Axiom's galloping crust lets up for rare seconds of gloomy ambiance, but for the most part, this band was all about punishment of the most relentless kind. Turku, Finland's Church of Nihil seem cut from a similar mold, but an extended listen sees the band breaking that mold more often than it adheres to it. Some stenchy chugging, some compelling melody, all beautifully held together by the brutality of that shifty framework we've come to call crust. Since you forced me to choose a favorite on this one, here you have it: CON win this. If by this point in the record you're all crusted out, Autonomia from Lima change things up a bit. Their hardcore is crust only by association. More accurately, this is ultra-melodic hardcore, simple but penetrating, like a clever slogan, or a dagger. While the passion of their ideals echoes that of Sin Dios, the simplicity of their melodies hearkens to something much older.

3 bands from 3 continents, and some Dennis Dread art...

In other news, I have revamped the following derelict links by request (let me know if you need something re-upped, because I am not going to check every link myself...)

Also, if you have linked me to your site but I haven't returned the favor, let me know so I can do so.
Posted by Batguano at 9:13 PM

thanks for coming out of icu.

Good to have you back, sir.

if we are into asking lp's from you i have to remind you that out cold lp (lol lol lol)
good to have you back among us, sir...
that murderess lp, is it good?

Good to have you back. I don't download that much, but you have almost identical music taste as me and I've dl-d stuff from this place far more than anywhere else. Keep up the great work.

Hey ya'll, thanks for not giving up on me there. Being back is good; seeing you back here is beyond great!

Mikxxx- I was gonna ask if I "owed" you any rips; I still haven't sent Out Cold? I suck. I'll hook you up shortly. I may even have the Murderess LP for you too. When I read that they sounded similar to Zero Hour, that's all it took. They have the style and mood I've loved for years and their tracks range from promising to incredible. I think you'll like.

Malisha- I've noticed the similarity in our tastes for a long time now. That's why I always get amped when you post something on your blog. It's an honor to have you aboard and thanks for your sincere encouragment!

its great to see you active again and updating the blog,cheers and keep it up!!!

hey there! good to see you back! i mised the crusty stuff combined with excellent writing.
roman

Hey Billy and Roman, it's likewise great to see you guys back here. I'll try to keep the uploads coming...

hey! I was wondering if you could re-up it? The link says it is invalid or deleted.