Starving with our Stomachs Full 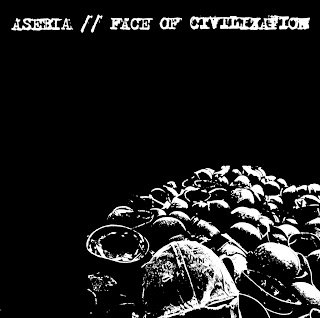 Another commenter has prompted me to dust off yet another post from '08 which I've been wanting to polish up for a while anyway. Asebia would make a great bookend to another slab of cold Northern gloom posted recently, and I daresay these Copenhageners stabbed even deeper into humanity's diseased viscera. They then proceed to mop up the filth left by this ailing beast with its own entrails. The attack is swift like all great scandi-thrash, but the evil metallic flourishes and abundant tempo changes really lend Asebia a singular signature I've come to admire in them and similarly gifted bands like Konfrontation and Acursed. Below their LP has been re-ripped at 320 kbps, and I've included the minimal graphics of the layout. Apparently there was a cassette version of these 10 excellent tracks, but its production is a bit mysterious and its distribution a bit shoddy.

this is amazing neo-crust (as i love to call this genre that has this enormuspassionate riffs) and asebia is top-notch, one of the best bands in this genre (comes in mind also schifosi)
great rip
thanx

Hey Mike. I don't know. I think the old rips were just of really shitty quality and by contrast the tempo seems different on these new rips. My turn table is set normally and I hope these rips are faithful to the actual vinyl... anyone else hear a problem?

hey, i download the old one in 192 and i think the new rip is a bit faster. listen to towers in the beggining and u see
anyway thnx for this great record

Thanks for your input! You're both right of course; there is a difference in speed. I played the LP again and it sounds like the new rips are more faithful to the wax; either that or my turn table is spinning faster with age! If anyone out there has the LP or cassette, let me know if the rips sound sped up too much.

this genre is kinda blown out and it can be hard to weed through all the shit out there, but this band does the tragedy+darkthrone sound quite nicely.