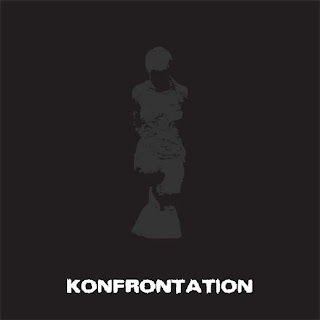 It was in the mid aughts when I was sure the Swedes were going to take over again-- Acursed, Kontrovers, Skitsystem, Martyrdod-- a small but terrifying enclave, harbingers of a new generation of bleak, razor-sharp Scandi-thrash. The blunt implements of their ancestors were traded in for scalpels edged for surgical precision, only to be applied with a nihilist's abandon. And then... I'm not sure what happened. Momentum petered out, or was diluted into more "progressive" forms of metal that were arguably more boring. Enter Konfrontation, who arrived on the "scene" like a star player 30 seconds late for its train. The unsuspecting station patrons would delight in what they witnessed, and this post is a weak attempt at deflecting the glint of the band's highly polished steel to a few more onlookers. What you'll hear on the band's LP is not unlike the gloomy excellence you've heard from the above bands, although the slightly more daring structures make for a much more memorable ride than most forays into this already intense subgenre. I've been keeping an eye on this one for a while, and although a ton of different labels released it, it is finally out of print, and as far as I'm concerned, public domain...

"Nedbrytningsprocessen" LP by Konfrontation
Posted by Batguano at 6:43 PM

Good as always. Thanks.

another sick upload as usual! Sick page. Keep up the good work. Check out my blog for photos of local and touring punk, hardcore, metal bands http://phophuck.blogspot.com

would love to trade links.

Hey Malish... Thanks for commenting!

Sick Niick- Thanks, dude. I'm linking you up now; enjoy the tunes.

i'm waiting about out cold
hahahahahah