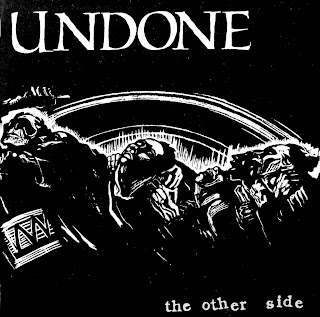 If anyone has the cure for Busy, please send it my way! There's no shortage of great music here at the headquarters, but the postings just haven't been happening for various reasons. I'll see what I can do to catch up this weekend, but for now here's a heaping gravy ladle of French 90's hardcore. I've noticed that a lot of my posts and would-be posts are of newer records, simply because there are a ton of great releases of late. But I can't forget the decade that this blog specializes in, and so I present the few releases I own by Undone. While I can't guarantee you'll love Undone as I do, they did offer an enticingly puzzling admixture of hardcore styles; if music doesn't cut it for you unless it boasts copious moshy metal riffs, emotive dissonance, or speed, Undone have got you covered on all accounts (especially the first two). It won't take long to figure out that Undone grew thorny and strong out of the same cracked concrete slab as Finger Print, Ivich, Vanilla, etc, and for that they should already warrant a serious listen. For today, I'm offering the band's later 7" "The Other Side," 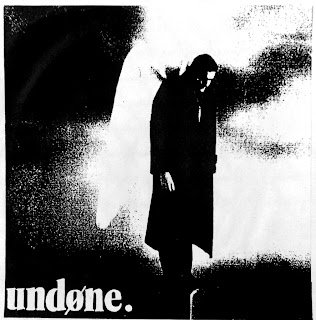 as well as an early 7" that I will simply call "Undone." Both rage, but on this early outing I like the vocals better, and the metal is cranked way the hell up. 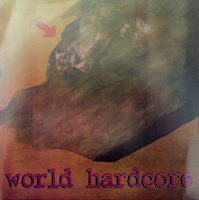 Since you hate comps, I'm sneaking in yet another rose among weeds, the "World Hardcore" 2X7". Perhaps it should really be called "European Hardcore", but whatever. A comp is a winner if more than half the tracks are at least good, if not great, and this one huffs and puffs across the finish line. I was mainly interested in the Vanilla and Undone tracks, but Olotila rock and it was nice to hear an early-ish Deadbeat track (post of their 10" coming soon).

Get the two 7"s and Comp here

More Undone posts as I find more of their releases.

** Addendum- Mike of mighty Twisted Tracks posted the 12" and the "Reconstruction" comp!

Thanks for this one! I've got their 12" but didn't have these 7"ers so this is cool. Should I post the LP or were you planning on it?

i very much wish you had posted the comp. i dont think (from my 3+ year search for it) its ever been ripped in mp3s... im especially looking for the vinalla song.

Hey Mike, no prob. I've been trying to get a copy of the 12" forever, but with no luck. If it can be fit into your agenda to post it one day, that would rule. Thanks!

Alex, did you download the file? The Compilation should be in there. The Vanilla track is awesome like all their stuff. Let me know if I forgot to put it in the folder or something.

Haven't taken the time to listen to this yet but was thinking about your cure for busy...how about some apathy with generous amounts of procrastination? Ha, ha, hope all is well.

Yeah dude, it's those exact 2 things that led me to being swamped in the first place! Some things never change, but at least I've got another vacation in two weeks!

see in thi web: www.lapaginadenadie.com (in "De Nadie"/Punk..../Fancines-WEbs-Bandas... ther's a discography do it yourself of this enormous band...

OK, finally re-ripped the LP and posted it:

Enjoy and thanks again for the Eps!

I love it. I picked up the first 7inch a few months ago and ripped it for my blog a few weeks ago. So nice to find more stuff from them, especially since I picked the 7inch up on a whim.
Thanks!
-Jon/itfollowshc.blogspot.com

Hey, sorry but mediafire is the bastard. Thanks for the request... the link is updated now.