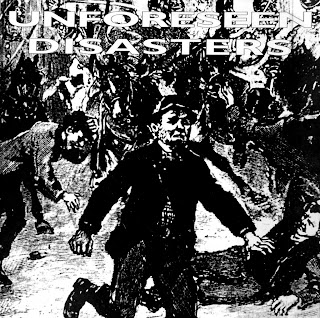 Another exhumed time capsule of the nineties, the "Unforeseen Disasters" comp offers an almost complete sampling of what was going on in that decade. Specifically, this one was planted in the loamy catacombs of The South, even more specifically, Georgia and the Carolinas. Of greatest interest for me is what I believe to be an exclusive track from Damad, which represents one of their earliest vinyl outings (along with the In/Humanity split). The same can be said for Initial State's "Die Silent," but that track also appears on a No Idea comp and on the band's own LP. In/Humanity, Quadiliacha, Blownapart Bastards, and El Toro each bring an eclectic tidbit to the gathering, making this shindig short, but hotter than Georgia asphalt. 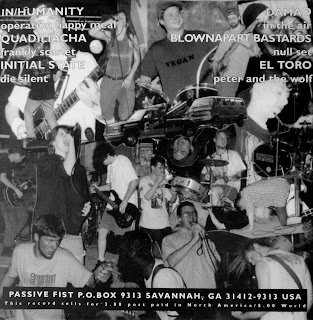 This is fantastic. There have been some especially great posts lately, thanks for the work.

Hee hee! My friend Pat (who now does a label called Hyperrealist) & I put this record out! Sure brings back some memories... I'm glad people are still listening to and enjoying the old Passive Fist stuff; we had a blast with the label/distro and met so many amazing bands & people along the way. Thanks for posting our records!

Sam- Thank you for releasing them! I first came to know your label through your In/humanity releases back in the day. I was gonna post the Unsettled Ep soon, but it looks like Mike (Twisted Tracks) beat me to it! So yeah, I'm kind of stuck in the nineties a little. Anyway, glad you stopped by.

hey man thanx again!! Found this 7'' in Montreal for $1,99 a coupla years ago great stuff