Kissing the Revolution of What We Are 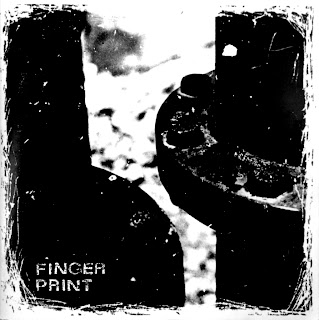 The Finger Print discography is getting harder to find, so I did some digging. With a little window cleaner my old scratchy copy of the CD made for some good ripping. As far as my personal canon goes, Finger Print were one of the delectable treats that lured me into the rabbit hole of nineties hardcore. Things would never again be the same for me, and I rather like it that way. Claw your way through the tangle of FP's jack-hammering drums, metallic dissonance, winding melodies, and curdling screams, and you'll find four regular guys, hacking their own rambling and fugitive path to the same vague place you hope to one day end up too. Like many acts of the decade, their path went somewhere inward, exploring the place of the individual among the shape-shifting and ghoulish menagerie of the political realm. Whether or not they ever found what they were looking for, I cannot say, but this 19 track document suggests to me that the journey was well worth it. There's nary a single throw-away (other than the awfully recorded live tracks at the end), and unlike many hardcore discographies, I am always riveted by this one from beginning to end. Speaking of the end, the final three studio tracks revealed a slightly new direction for the band, smoothing the jagged metallic edges to more elegant contours. Members would continue in this direction in the band Jasemine, who sadly only released four songs.
Finger Print discography (@320 Kbps)
Posted by Batguano at 7:06 PM

Fuck this is great!!!

thanks for posting @320k,I love this wave of french hardcore back in the 90's and sadly,like you say,Jasemine only wrote a couple of songs.

this is good!thanks!and it's nice to see you back in action,cheers!

Hey guys. Okay, now I'm back. Sorry for the silence around here. Ricardo, what can I say except that you're very welcome! I really appreciate your love for this kind of hardcore. I read a message from Christophe on the Stonehenge site that he'll be releasing the discography on vinyl to celebrate the label's 20th anniversary! Should be pretty awesome.

Billy, thanks as always for not giving up on me... I'm glad to see that your blog is still kicking ass; I'm heading over now...

This is such a great resource that you are providing and you give it away for free. I will be looking forward to your future posts. Thanks for sharing.