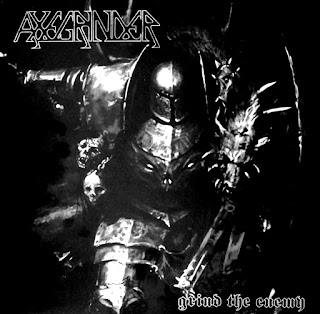 Whether you're of the opinion that Axegrinder was derivative or just happened to be doing similar things at the same time as other early UK crusties, you can't deny their place in the 'evilution' of the genre.  I for one have thoroughly reveled in their savage and methodical torments since discovering them for myself about a decade ago.  "Grind the Enemy" was Axegrinder's raw punisher of a demo released before their opus, "Rise of the Serpent Men;" but the rips I've been stringing along for years were a bit lacking. Now that I think of it, I probably could have found better rips if I was more persistent.   But, enter the (Italian?) bootleg operation, Pelvic Alee, who got it in their minds to release the demo on LP recently.  When this arrived at my doorstep, I was quite the giddy mess-- so much so that I decided to rip it.  The "label' did a quality job all around from the sound (keep in mind this is a 26 year old punk demo), to the covers, to the insert which includes lyrics and a biography of the band.  Check it out; I don't know if the quality is any better than what you have, but I wouldn't be much of a host if I didn't share.

This does sound better than my copy. Thanks

Hi,
thanx for all your great posts, this one is good too, better sound than my tape copy.
I know you have a lot of requests, but i'd like to make one too.
Calloused "still failing world" ep, can't find it anywhere. Weird, as it's easy to find their split and lp.
Thanx a lot.

Happy to help out!

Anonymous, I've been sitting on a Calloused post for far too long. I'll get that EP up by mid-week.