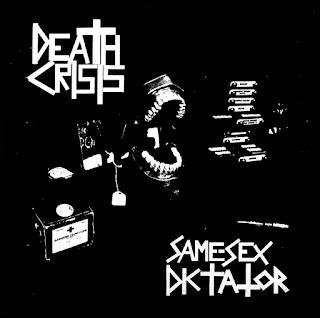 Fast-forwarding 16 years from the last post, this split series continues with an outstanding pair-up from last year.  Side A is (I believe) the second outing from San Diego bros, Death Crisis.  From their name, you probably guessed one band members were in previously.  DC are hardcore for the fan of bullshit-free bands like Out Cold, but whose ADHD is lighter on the "AD" and heavy on the "H."  Tried, true, but still relevant themes of media brainwashing and apathy are strongly represented, as well as a new one: douches who bring their dogs to hardcore shows.  While I've never experienced this first hand, I can understand their irritation (but for the record: my dogs do/did like hardcore... still wouldn't bring them to shows though).  Death Crisis also have out a 7", and another split 7" with 80's San Diego D-beaters, Diatribe; a burgeoning website can be found here.

Side B brings perennial FE favorites, Same-Sex Dictator, in what might be their most primal form.  These two tracks were written and performed straight from the brain stem, and given the option of fight or flight, I'm thinking SS-D choose the former every time.  In describing the band's inimitable and incredible LP, Justin (drums) felt that his band was more caveman than the proggy descriptors I used.  If you've heard the "Descend to Syncope" tape then you know what he means, and on this outing the band has gone positively neolithic!  It's also possibly their most blackened offering, considering the faster speeds, atmosphere, and less-than-sparkling production values.  This time the lyrics take a blunt ivory implement to the skull of themes like system moochers ("I'm Not Paying for Your Failure") and the Orwellian/Kafka-esque world we drones inhabit ("Removed By Paperclips").  The split is still available in two formats, so I'm supplying my crappy vinyl rips for a limited time.  Yes, music is digitized, but real people are putting in real time and resources to make this all happen.  Please support them.

I don't come here enough, always some good tunes in store. Hope all is swell.

Yeah, I don't come here much either (or anywhere else on the interweb lately!). Hope your year is starting off right, Justin. I'll be checking your digs soon.