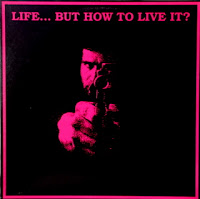 Absolute criminal neglect! I don't believe there are any Life But How to Live It records/CDs in print. Even Ebullition has let the glorious 12" to your left out of circulation. Oslo's Life... But How to Live It was one of the most creative and talented bands ever to be associated with the words punk or hardcore. Certainly, many will object to the latter term completely, even with the looseness with which that term was tossed around in the '90's. But LBHTLI exemplified the politics and ethics of hardcore, even if they did employ a whole lot of rock elements. The main factors that made this band such a standout force in music were the amazing guitar work and soulful vocals of Roger Andreassen and Katja Osvold respectively. As the band progressed toward the middle period of their short 5 year existence, Andreassen became more daring with his squealing brand of rocked out, fretboard artistry. The two eps that followed their "Day by Day" LP are testimony to his over-the-top, hyper-active guitar genius, which is why I placed them at the top of the download list below. Then there's Katja... The robust melodies she belted out are a rich mixture of the angst of punk, the catchiness of pop, and the soul and sincerity of folk. Lyrically, the band blended their political message with a very earthy, personal touch, which only endeared them more to their '90's audience. To those who have never listened to this band, I would suggest entering their musical world with an open mind (especially if you are an exclusively crustified grindcore type!). And to everyone: below are tracks from the "Green" EP, the "Burn" EP (also appear on the Ebullition 12"), the self-titled LP, and the "Day by Day" LP. Thank you to a few anonymous people on Soulseek who have unknowingly contributed to this collection!

Some members are currently in a punk band called Drunk.
Posted by Batguano at 6:42 PM

Labels: hardcore, Life...But How To Live It, Norway, punk, Rock

Yeah !!! great post !!!
A criminally underrated band but it seems that the great English label Boss Tuneage will release a 2 CD discography in the (near ???) feature, looking forward to that !!

I hadn't heard of the discography until now. Knowing this gives me hope that the world hasn't gone completely insane! I'll keep these files up for a little while longer, though... so enjoy, and try to support Boss Tuneage Recs. After all, they're the ones who re-released Heresy's stuff too.

drunk is now inactive as well... sadly. i loved both bands, and was always some of the best live experiences.

YES!!! Thank you!!! I have a few mp3's form this band but have been trying to track their stuff down for YEARS with no luck! Such a great and underrated band. I can't wait to download this stuff and check it all out! I'll look forward to the proper discography as well, if it happens!

I'm soooo glad to hear from people who are equally enthused about this amazing band. It's also great to see that you and your machine are back in action, Andrew!

Big thanks. I drop from the scene 10 years ago and lost my old tape with first LP, but missed them deadly. You made my really nice christmas... and, for sure, I will not seal these masterpices for myself. Cheers.

this is really interesting stuff , never heard of them before , so thanks to you - timo

DL'd this a while back, but just now listening to it. Really great, I can see why you are so enthusiastic about them. The vocals are similar to Shocking Blue, with 90's Bay Area melodies and great punk sensibility.

Thanks for putting this out. Remember seeing them live ages ago, and they were great. I agree - this band deserves so much more status...
Cheers Canuto

Don't know if you're aware, but I just found out that on their myspace they have links for pretty much everything by them IN 320 CBR no less! get while you can.
http://blogs.myspace.com/index.cfm?fuseaction=blog.view&friendId=56532700&blogId=490825163

Thanks, man! I never followed through with that 'cause I assumed they were low quality. I'm all over that!

do you think you could re-up the LPs? i don't think that discography ever happened...

Man, I'm sorry for neglecting your request for so long. All of their releases minus the demo and live stuff should be in the links now. Thanks for being patient.

Wow!!!! Thanks a million times for this - links are still alive :)
What a gem!