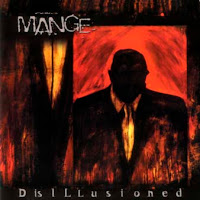 The word of the day, girls and boys, is HEAVY! SoCal's Mange serve up the heavy with a steam shovel! Consisting of members of anarcho-grind legends Phobia, and now featuring members of crust-metal gods Dystopia and progressive metallers Anubis Rising, Mange have managed a very sparse output of some of the heaviest sludge metal ever produced. It all started in 1997 with their "Junkie" demo, followed the next year by the immensely heavy "Disillusioned" CD (Half Life Records). Release-wise, the band showed little sign of life until they put out their 2005 self-titled demo, which has a decidedly doomy, "Noothgrush-esque" lean to it (not a bad thing at all!). Their one readily available release is of course, "Disillusioned." This disc showcases one of the heaviest guitar sounds I've ever heard (the heaviest?) with tempos that are all over the place, but stay in the "fairly slow" range most of the time. The riffs are often catchy, but not too noodly, leaving enough space for the heaviness to sink through to your very soul. If you enjoy Phobia's traditional grind vocals, you'll find a similar delivery here, which of course, works well with the overall intimidating heaviness of the final product. Listen to this after a bad day, and all will be forgotten.
Sample the Heaviosity:
"Wealth of Ignorance"
"Fallen Depart"
Support the Band/Label (as always):
Half Life Records
Crimes Against Humanity
Posted by Batguano at 9:29 AM