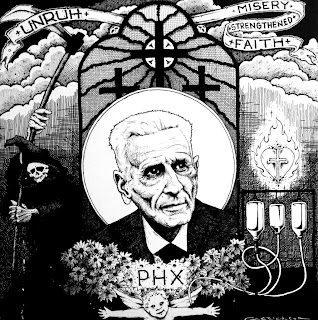 Here's Unruh's two part prescription for the most brutal form of Euthanasia: the first to knock you out, the second to end it all. This is the most extraordinary of renditions Arizona-style that's caught in the Rorschach dilemma of being either metallic hardcore or hardcore influenced metal depending on what angle you view it from. After all these years, Unruh's Hell is still hotter than Satan's crotch, like a chunk of coal emerging as a shining jewel after smoldering in His loins for 13 or so years. For the take today is Unruh's debut LP "Misery Strenghtened Faith" and... 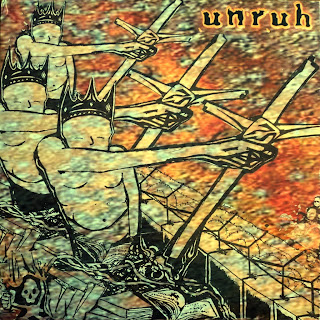 their follow-up/swan-song "Setting Fire to Sinking Ships." While both are nearly equal in their raw brutality, I would venture to say that "SFTSS" surpasses its predecessor in production and technical precision, as well as in the impact and originality of the lyrics. As to which I enjoy more, I lean toward the first, but really you just can't go wrong with either one. Both have been ripped from the vinyls at 320 kbps as per request from Mike, but you may want to check Pessimiser Records (if you can find them) or ebay to find the CD version of "SFTSS".

"Misery Strengthened Faith" by Unruh
"Setting Fire to Sinking Ships" by Unruh
Posted by Batguano at 9:45 AM

oh fuck yes. these plus their seven deadly sins track make for a great soundtrack to today. thanks for posting.

No prob. The tracks from their two splits weren't bad either!

thank you !!!! No band has done it uglier and fiercer than Unruh. Mandatory.

Great band from the late 90's! Their influence has been rekindled in a couple Seattle bands as of late like Cross and a new, unnamed one from Helm/Meisce members.

Yeah, there's tons of good stuff coming out of that town these days. I'll definitely check out those bands ASAP!

Uh oh, another Justin, ha, ha. Thanx for these man, never took the step after hearing about these guys to give them a listen. HEAVY! Songs over 5 minutes tend to push me (of any genre) but "Spoonful of Tar" had me from start to finish (plus I can kinda relate). Thanx as always Senor Quechua huanu.

Hey Justin,
Yeah, at first glance I thought the other Justin was you! Lots of Justins and Mikes= not a problem. Anyway, yes, the word HEAVY pretty much says it all. Enjoy!