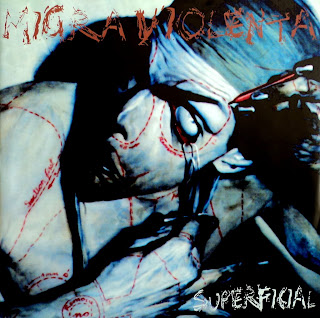 Around 2004 my waning interest in hardcore hit a point of resurgence with help from a newly resurrected Profane Existence, who were releasing some pretty great stuff. Their distro then introduced me to another a burgeoning label that still can do no wrong: Alerta Antifascista! I picked up a grip of invigorating vinyl products, but one in particular was like a sparkling Roman candle wedged in the butt crack of my musical conscience: Migra Violenta's "Superficial" 10". It may not be the only reason I have yet to lose interest again, but it certainly snapped me out of the malaise. Migra Violenta consisted of hardcore kids from various South American countries who had immigrated to Argentina. Although they were compared to Los Crudos, I suspect that was mainly due to a lot of American reviewers' lack of exposure to Spanish speaking bands. Crudos was never this fast or tight (although I still love them to death... SOTW coming soon on them...). "Superficial" is packed close with manic, antsy blasts of defiant hope in the face of the impossible and immovable. Speed, anger, and even good musicianship are nothing new I guess, but these guys did their own take on it, and not only did it come out superbly, it's also endlessly listenable. The band has a ton of other releases, including an LP on Profane Existence, and on the 10" below they added two tracks from their Kontraataque split.