The Beast That Despair Feeds 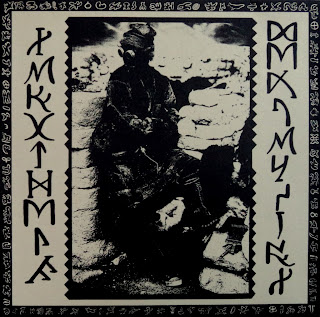 Jobbykrust is the choral chant of thousands of smelly angry people, fed up with always being smelly and angry. Really they're a potent amalgam of all that was great about the hardcore coming out of Scotland and Ireland in the nineties: the unrelenting mucous flow of Pink Turds in Space, the common sense politics of Disaffect and Sedition, the fugitive taxonomy of Scatha, the tasteful, delicate flourishes of The Dagda. This band was simply incredible, and you might be able to get their entire discography here. But tonight I'm posting rips of their scorching split LP with Viktors Hofnarren (Switzerland?), a bunch of filthy, surly polyglots who rock a pretty straight forward form of political hardcore with the crusty edges still intact. Perhaps not as straight forward as Paragraf 119, but similar in their crudity and stool-loosening energy. For sure, a band to be blasted loudly, not dissected verbally.

jobbykrust at their peak. a fantastic record. the composition, the atmosphere... if only the sound was a little bit thicker. viktor's hofnarren are cool, but this record is kinda one-sided for me. many thanks for providing this jewel! made my day
roman

Once again, I totally agree, Roman. Then again, I would hate to be the "other band" on any Jobbykrust split!

Well, except for Wisigoth. I would love to hear those songs from the Jobbykrust split recorded better, as their 7" was absolutely crushing.

Yeah, I've been trying to get ahold of other Jobbykrust and Wisigoth stuff for about a year, but something always gets in the way of it. One day.

thanx for this. i m still looking for the Jobbykrust/Blurred Vision split 7", i think my blog mate has a copy but i can't contact him

Well, thanks for looking out, Bill. I'll keep looking myself.

I'm pretty sure I still have the VIKTORS HOFNARREN demo and a split tape with ??? somewhere and I also think I still have JOBBYCRUST stuff besides that split 12".

will dig a little bit and see what I find...