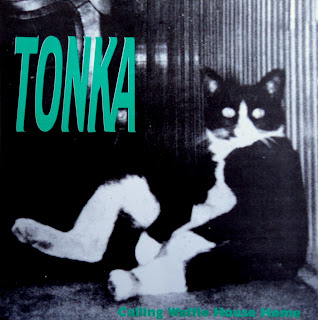 Mr. Nuclearpowergrind requested anything by pre-Assfactor 4 bands Unherd and Tonka. Mike at Twisted Tracks stepped up and posted the Unherd LP, and after some searching, I managed to track down some odds and ends. We start with the Tonka 7", a collection of four high-energy, youthful tracks bathed in DC post-hardcore, but hung to dry in a more southern clime. The cover design indicates either the band's affinity for early Jawbreaker, or a mere coincidental resemblance to a certain album of theirs. Tonka wasn't as fast or hardcore as Assfactor, but they nailed this style damn well, as did Unherd. 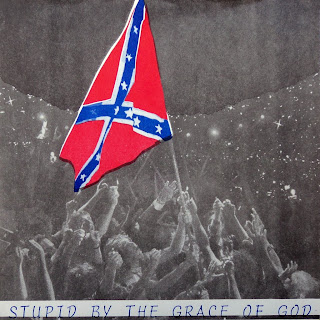 Both bands contribute solid offerings on the "Stupid by the Grace of God" comp, which showcases four South Carolina bands. In addition to Tonka and Unherd, we're "treated" to some syrupy pop-punk by way of Toast, and a helping of "cereal-core" compliments of Bedlam Hour. I thought "Frankenberry Mosh" might be a silly fluke in their discography, but the photo on the back depicts one member wearing a Cheerios box on his head. Good thing this never became a trend. 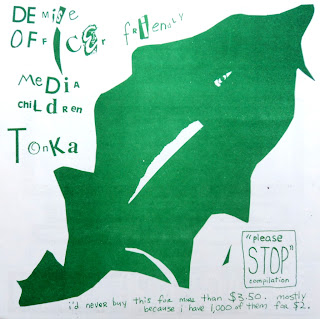 Finally we arrive at another Unite and Fight Records release, the "Please Stop" comp., relevant here for its two solid Tonka tracks, and curious for its inclusion of Orange County peace punkers, Media Children! Demise play decent old-school hardcore, but I'm not too fond of Officer Friendly's track.

Get all three records HERE
Posted by Batguano at 7:55 PM

Aww... I would love to have all 3 of these 7"s. I do somewhere. ...somewhere. Link doesn't work. Any way you could put them back up? I put out the "Please Stop" comp 21 years ago but haven't heard in a long, long time. Another example of "Hey, we're friends. Want to be on a comp 7"?" A little continuity would've been nice, but whatever.

Hey Coach! I'm happy you got in touch and that I was able to reunite you with your past. It's weird, but the things you criticize your releases for are the very things that give them that 90's, DIY charm. I know it's a bit late, thanks for releasing those comps, and check out the link; it has been refreshed...

Oh man, I arrived too late to download those Tonka tracks. Can I convince you to repost?