Powerless with a Guitar 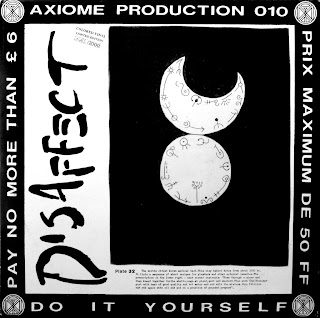 When the clutter of life becomes so entangled as to become a hindrance to living it, I look to bands built on a framework of simplicity. The last month has been one of those times, and Disaffect has been one of the remedies. By now the band is infamous as part of the Scottish division of the more hardcore branch of peace punk produced in the late eighties/early nineties in parallel with Nausea, Disrupt and the like. "Powerless With A Guitar" is a posthumous live document that proves to me at least that Disaffect only gets more classic as the years pass. Side "Punk" is a superior recording of a set in Glasgow in '92, and side "As Fuck" is perhaps one of the band's last sets (1994), and was recorded in Dijon. The 23 tracks hereon make a great bookend to their studio discography, the main contents of which can be found on the resurrected Stay Female Fronted blog.

Thanks for the info\never heard of them..

I only lately commenced leaving comments! Makes me think a small significantly more about what I enjoyed and learned about the post! I will return soon.