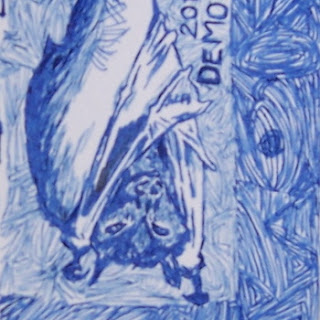 I'm forced to ignore many band submissions due to scarcity of free time, but I couldn't ignore Haldol. The first impression was that of a hazy deja vu-- not that I had heard it before, but that at some point I imagined a band with this sound; perhaps it was more of a hopeful premonition. Haldol is hardcore, certainly, but in between the fits of frantic riffs and raspy snarling, the band enters musical space evoking what I can only fathom to be the inner demonic cage match induced by the drug for which they are named. The jarring tempo changes could be a liberation from this, or the victory of those inner demons. Either way you look at it, the outcome for the listener is more like the majority of other drug experiences-- ups, downs, fatigue, cravings, and, finally, addiction.
According to Geoff, Haldol is engaging on a tour soon or now, so get in touch. The demo is available on a sliding scale for download at their bandcamp page, and will perhaps be released on cassette one day. Songwriting for an LP is in the works, so keep checking with them and over here for updates on that. For the next few days I'll have the demo available, as long as you send the band some dough as soon as you become hooked.
Haldol Demo
Once again... Bandcamp
Posted by Batguano at 8:22 AM

We just couldn't leave your website before saying that we really enjoyed the quality information. I am very impressed with the article I have just read.