War- is the new Dis- 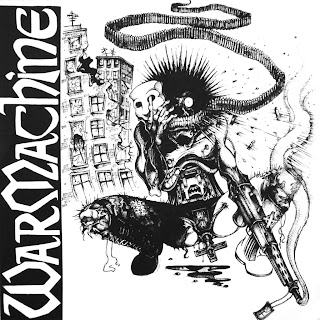 All request week begins, and although I have three posts planned, feel free to try and get one more in (the catch being that I have to actually own the thing already). This and the next post are requests from way back, so the guys who asked for them may very well not be around to enjoy them. We are though, and like all requests made from commenters thus far, they turned out to be splendid choices for anyone with ears for the good noise. The first is from a couple of Portland bands from the late nineties, War Machine and Yankee Wuss. The first starts off on side A and then continues leveling and blasting its way through part of side B. These guys had something to say and weren't gonna stop until it got said (except for the track "Yuppies out of Punk" which I can't locate on any of the grooves). Portland, 1990's pretty much sums up what to expect musically: D-beats until tomorrow, and simple yet catchy riffs. My knee-jerk comparison was to Excrement of War, but there are probably a ton of local references that would do just as well. In fact, members probably played in those bands too (Detestation is one I know for sure). 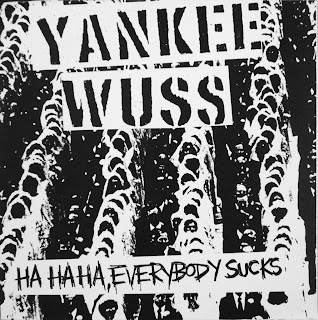 Yankee Wuss have overlapping political sentiments with War Machine, but the similarities end there. Their lyrics are less broad and more snide, and musically they tend to flee frantically from the cliches of their time and place. The tempos range from fast to faster, and the shouting and screaming matches this; but then there are the melodic vocals and the light guitar distortion. This might throw people off, or it might suck them in. I find it refreshing myself, like all the best aspects of Ottawa, Manchurian Candidates, and The Hated congealed into eight tracks. The light distortion is even more perplexing considering the members' connections to Atrocious Madness, Midnight, Detestation, and (to a lesser degree) Harum Scarum, but fuck type casting. This thing rages raw and pissed in its own kind of way.
War Machine/Yankee Wuss split LP (self-released (?), 1999, 300 pressed)
Posted by Batguano at 4:41 PM

hey marc! excellent choice. looking forward to listening! didn't hear this one for quite some time. since you mentioned manchurian candidates - maybe you have some of their records (besides "between reality and shadow" cd) you could post. thanx a ton for this one! have a good time!
roman

"D-beats until tomorrow"
still laughing...i think they are the three detestation(s) except saira with the singer of axiom...i looking for that one quite long time.
always enjoying your writing
if you like i can sent you a deadly rare demo from greece if you like to post it
just to see your writing upon this diamond
cheers

Hi,
thanx a lot for this one, was looking for it since ages.
So, as you're really nice publishing requests of people, i'll try one, can't find anywhere the Default "die with honor" and "restraint" eps.
So if you, or somebody else could help me, that would be very nice.
Thanx.

Anonymous and Roman- Thanks for getting involved! I'll see what I can dig up for you.

Hey Mike, Thanks as always for your words, feedback, and info. I would love to hear that demo, even if I may not be able to post it any time soon. I'm loving all the Greek stuff you've posted and recommended-- keep it up!

Awesome! I've been trying to find an lp copy for YEARS now.

Yeah I got lucky with this one... it popped up in a distro pretty randomly. Anyway, I hope the rips hold you over till you score a real copy. Best of luck!

Mike is correct, Warmachine were Detestation without Saira and Kevin (later on Axion) on vocals, Mandy from Destroy replaced Kevin for short time. Warmachine also released a tour ep in 2000,i posted it some years ago, this split is so fuckin rare because of the limited number of copies (250 or so). again thanx and cheers!

Got one (perfect condition) and dont need it anymore. If interested, mail me punkordie1 at gmail.com.