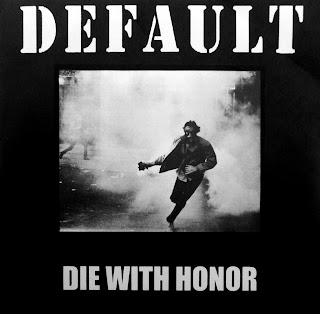 I've got another handful of random requests to fill, starting with Default's "Die With Honor" one sided 7" (sorry, I don't yet have the other EP requested). There was a time when Default 7"s were being sold for a dollar, and in one instance, I received one free with an order. What a travesty. Maybe it was because they were from Wisconsin and didn't release an LP (I don't think), but they never received their due respect. The "Complacency" comp was my first exposure, and those 44 seconds of gonzo crustcore made them standouts even among the honorable company they were in. "Die With Honor" thankfully continues along these lines, burning with such intense fervor that the tracks disintegrate shortly after starting. The impression is lasting, though, due in part to some flourishes in the songwriting, but mostly due to the tornado-like ass-kicking they deliver. 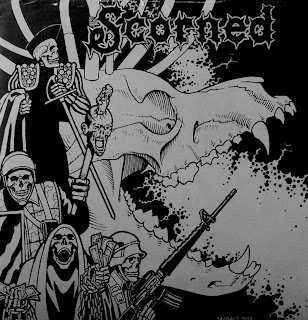 I got a request a while back for the first Scorned 7", and why not? Scorned is one surly political hardcore ensemble with a scary guitar sound. Being a pretty raw and rough outing, I would maybe not recommend this EP for the uninitiated. After listening to either their LP, split 7", or more recent 7", the first one can be a lot of fun, if fun includes the hardcore equivalent of a jackhammer and a chainsaw trying to drown out the shouts of an angry neighbor. Scorned is another in probably a long line of mid western bands that deserve way more attention, so give 'em a shot.

I was going to post the "Double Crossed" 7" by feisty Texans, Manchurian Candidates, but then I remembered that Mike included it in his post of the LP. For now, we'll just have to settle for some comp tracks until I track down their other 7" and split 7" (which I thought I still had...). Two tracks were re-ripped from the "El Guapo" comp ("Blind Lives" is still my favorite) and the other comes from "Reality Part 4" (a much more metal manifestation of the band).
Default, Scorned, Manchurian Candidates
Posted by Batguano at 7:09 PM

THANK YOU FOR DEFAULT!!! That was the last one I needed to replace the records I sold off! I loved those guys, especially the EP on Beer City. The were on another few comps as well and had one more 7" as well... nothing else I can think of.

The Beer City EP is hot shit indeed! Thanks for coming by and enjoy.