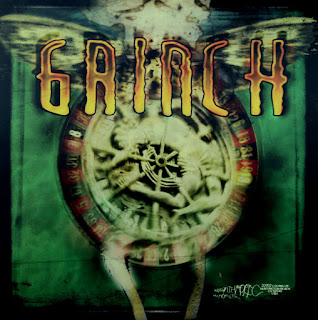 Dark, dark days lie behind me, but the light is coming back up ahead.  This time it will bring a slew of splits, and things will once again be noisy around here.  We start with a band mean enough to steal your Christmas, but it's more likely they'll just lace your candy canes with something extra special.  Grinch was some grungy, stonery, post-hardcore rock whose line-up consisted of members of Christ on Parade, Machinehead, Crimpshrine, etc., and whose touring crew at various times consisted of Aesop (Ludicra, Fuckboyz, Agalloch), Tim Crow (Zygote, Smartpils, etc.) and Spider (Amebix).  It's tough to nail their sound, and to keep the mystery mysterious, they don't sound like any of the bands above.  They produced two full lengths prior to this split LP, "Eden" and "The Blacking Factory." 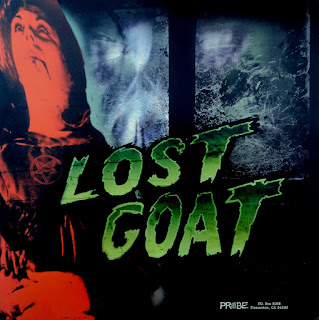 Lost Goat continue the trip, but with more noise and effects to thicken the ethery haze left by Grinch.  LG can't be accused of following formulas from track to track, as each one has its singular way about it, while still showing off the band's gift for rocked-out, yet off-kilter riffs, leathery vocals, and that well-documented creepiness hinted at by the cover  "art."  Lost Goat might be an acquired taste for some of you, but if you awaken in the night with strange dreams and cravings, the band has three full lengths, a 7" on Alternative Tentacles, and a split 7," which I may have to post soon.

Hey,
great to see you're coming back, sorry for your hard times, and i know it's uite difficult to keep a blog updated and keep the motivation when nobody seems really motivated or grateful.
Wanted to thank you a lot for all your posts, one of the most interesting blogs to me.
I don't know if you still accept requests, but i'm looking ofr rips of both Peacebastard EPs, it's a german band with the girl singer of To What End, powerful crustcore, and i think it's a shame to don't find it on internet as they deserve some attention.
Thanx a lot.
Keep the good work.

An ace release from the "heydays", on two excellent labels and boy is this split needed right now for me.

BTW I was introduced to Lost Goat through their tour in 99 with Dystopia. I have not forgot the all girl group.

cool. I picked up a Grinch album off Cosmic Hearse a while back, and it usually stays on the rypod. I was thinking i remembered Lost Goat, but then i realised the band I was thinking of was Lubricated Goat. Glad to see some activity here. Hope you are well.

The moral support is much appreciated. Things ended up not as bad as they could have been, and there are a lot of regulars who come here, which reminds me why this blog thing is kind of fun. Thanks again. As for Peacebastard, they sound badass. I'm on the case, so watch for that!

Vill- agreed on all counts. I missed every opportunity to see Dystopia somehow, but that must have been one hell of a show!

Ry- Wow, good to see you here! Ditto on the well-wishing, man. I believe Aesop posted a tape of the Grinch tracks from this disc way back when. Anyway, hope you survive the holiday madness!

...it'd be great if you could re-up this lp since it seems to be impossible to find a digital version somewhere else.... cheers!

Hey, I re-upped the split. Check the link and let me know if it gives you any trouble. Thanks.

...great - thanx a lot! even in top quality & with cover scans - yeah! but wasn't there an insert for lost goat too?! i can't quite remember since it seems to be ages since i had this lp....

I vaguely remember an insert. Maybe I'm thinking of a different record. I checked the sleeve and couldn't find it in there though. Weird.