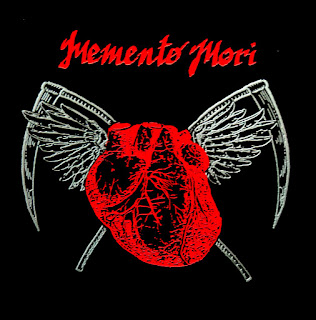 There are no fewer than six bands with the name Memento Mori, so let me start by establishing that this is the one that did a split with Kylesa way back when.  This Memento Mori hung back in the trenches along the fringes of warring musical worlds, following mainly the protocols of that excruciatingly personal hardcore come to fruition in the nineties, but donning an impenetrable veneer forged in the fires of speed metal, melodic death metal, and early Celtic Frost.  The twelve tracks on their posthumously released CD shows an even more artful melding of those styles than some members' previous band (Sutek Conspiracy tracks have been re-upped here), and were gleaned from MM's 12", split mentioned above, and unreleased recordings. In Memento Mori's case, I think it's more than appropriate to mention that the vocalist later joined Scrotum Grinder and is currently the screamer in No Statik, and that the guitarist is/was in Saros.

Coming soon (I promise!)- Re-ripped Despise You/Suppression split 7"
Posted by Batguano at 8:13 AM

How can I do anything but download this with a description like that...a fucking word-smith! Cheers Mr. Guano

Hey I'll be the first non-Justin to comment here! Thanks to you both for the info and encouragement. I think someone mentioned Vastum on the Sutek post, but I totally forgot. I gotta check them out.

Signed in under Google otherwise we would have had two Justin's. Funny thing is, whenever someone I know is having a baby, I tell them, "you know Justin is a nice name, Justine if it's a girl".

I'm really digging this!!! Funny how when I was listening to this I was getting a slight Integrity vibe, only to later see that it was recorded at Mars in Cleveland...

Clevo, eh? I didn't quite catch that when I've listened to these guys, but I guess it kinda makes sense.