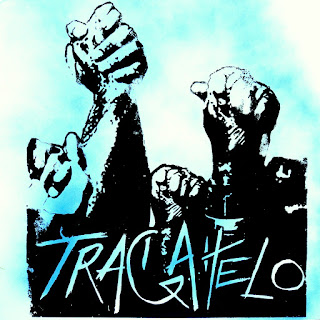 The end of our last century brought the hardcore world platitudes-a-plenty, from the personal to the sweepingly apocalyptic. But there was always an overpowering, undermining presence, seeping out now and again from the barrio cracks, and snapping us out of our self-righteous daze.  Spearheading this force was Martin and Lengua Armada Discos.  Both names have become inseparable from the names Crudos and Limp Wrist, but this post will focus on one of the less celebrated bastard children of the franchise, Tragatelo. I'd like to think it was celebrated less only because of its brief existence.  As Ricardo pointed out, the band was formed by Martin and Lina (of Subsistencia) among other hardworking musicians active in the late '90's.  Lina takes most of the vocal duties, and the band backs her bansheefied screams with the same raw and elemental drive that immortalized some of Crudos's finest work. New fangled designs will come, dazzle, and eventually succumb to obsolescence or else collapse under the weight of their own convolutions.  But the LA Discos workshop hammered out simple ones, made of the most solid stuff, and which aren't likely to wear out for some time yet.

The twelve inch below comprises the band's tiny discography, collecting their side of the split demo (with Kontraattaque) and some unreleased tracks.

The song "Rabia Sin Razón" is like a unreleased CRUDOS song.

I can't buy records anytime, cause here in Argentina is expensive, so blogs like this, that upload records with complete artwork, makes me really happy!!

Thanks a lot. I be waiting for the Memento Mori disc.

I can relate to the expensive vinyl problem. I've had to cut down too. I'll continue helping out as long as I can here on the blog!