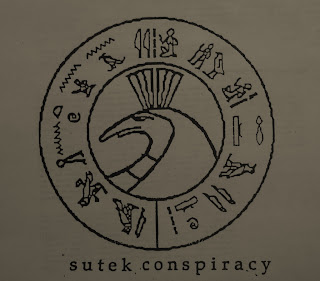 It's a good thing I waited before posting the TR/Sutek Conspiracy/Catheter split CD, because (aboynamed)Stew stepped up and hooked us up with the entire Sutek Conspiracy discography! The compilation is homemade, since no such CD was ever released, but Stew did an awesome job putting it all together. SC was based in Indiana and played an emotionally charged hybrid of metal and modern hardcore that never really received its due praise outside of perhaps the mid-west. Some members went on to have a colorful future, as Stew mentioned, "I only got to see Sutek twice towards the end of their run, once in Athens and once in Columbus. Fucking rippers live, though. After they broke up, the drummer (not sure of his name) went on to play drums in The Dream Is Dead. Leila Rauf, the guitarist, moved to Columbus and played guitar in Memento Mori (along with members of The Awakening, Scrotum Grinder, Cobra Kai, and more) and I think another project called Valkyrie (also with Matt, the other guitarist in Memento Mori) whose tape I was able to find ripped on a blog called Cosmic Hearse. Then she moved to the Bay Area and now plays in a progressive death metal band called Saros (sound a bit like Cynic to my novice ears) who are also pretty killer." The folder below has material from their self-titled CD, demo, 4 splits, and a comp track. I recommend listening to the demo last (tracks 1-6) because the band hadn't yet started wielding their sharp metal edge. How ever you approach it, this collection is powerful and essential especially if you are a serious DIY music scavenger like most people who come here.


The Sutek Conspiracy discography
Posted by Batguano at 6:06 PM

Actually, sorry i didn't make it clear. They were actually based out of Indiana, I think maybe Lafayette.

Shit! My fault... it says so right here in the liner notes of the CD (Lafayette). Corrected. Thanks again!

Damn good taste in music is what you sirs have. Kind of a breath of fresh air on this one. A band with obviously a lot of various influences and it shows in the uniqueness of the songs. Thanx for this.

also, leila is on the last bastard noise record and has anew band call vastum i believe...and pete has a band called blarmaggedon

Hey Jeremy, glad you could stop by. It's not a CD exactly; just a digital discog. aboynamedstew put together. I refreshed the link so you can download it. It does have some scans too. Thanks!

i also have about 15 copies of the original TR/sutek/catheter split cd if anyone is interested, email me at jeremyrossarmstrong@gmail.com

thanks for compiling this comp!

Please refresh the discography link. Want this quite badly!

Me too. I saw them like 14 years ago in Kirksville, Mo. Was hoping they were still around, was trying to contact them or at least get the names of members. I never got into that type of music, but it was a sight to behold.

Me too. I saw them like 14 years ago in Kirksville, Mo. Was hoping they were still around, was trying to contact them or at least get the names of members. I never got into that type of music, but it was a sight to behold.