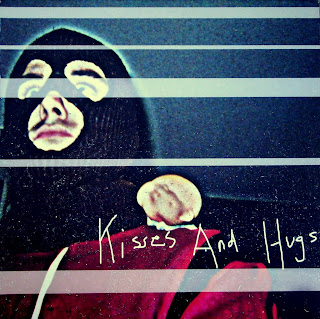 Continuing on the trope of bands with curious names creating wonderfully fucked up music, here we have an almost-discography from Kisses and Hugs. Another overlap with the last band posted is Kisses And Hugs' soft-spot for insane distortion, blast-beats, and humorous song titles. Not to mention there's a totally jacked-up cover song ("Kiss Me, Kill Me" by Negative Approach). Titles like "Civ Lied" and "Genital Ben," make me really wish they had supplied a lyric sheet, but we'll just have to use our imagination instead (the crazed vocals certainly don't provide an in, either). So who were Kisses And Hugs? They were three rural Pennsylvania/New Jersey youths who look like the kind of kids who got their asses kicked a lot in elementary school (a compliment is a weird kind of way) but who shredded out some insanely fast and chaotic hardcore and unbosomed their angst with quirky and funny words (presumably). I first came to know the bands from the "Education" comp (Mountain Coop) and their split with Halfman (the former tracks appear on this LP). The album posted today is mainly material from 1994 when faster hardcore was only beginning to adopt its clique-y posturing, so it's free from all that. The LP itself only reached the pressing and circulation phase in 2001/2002, and only 500 were pressed. That's about all I know. If you need the split, just leave a comment and I'll get on it.

wow! this band just fucking shreds! this is indeed a "document of rural frustration" :) juvenile rage in its purest form. if you could post that split w/ halfman, i'd be eternally grateful! thanks a lot!
roman

This looks interesting, thanks !

this is pretty rad

Hey, good to know someone else liked this one too. Many downloaded this; very few gave feedback.