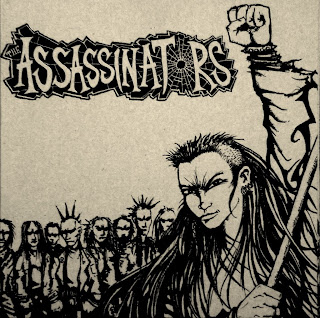 The Assassinators' 7" is a somewhat recent release, but since I can't stop listening to it I felt the need to share it with you (and it's out of print now). This Danish band gets compared to La Fraction excessively, so in my pessimism I figured they sound like nothing of the sort. They actually do, though, with some mixed in accents of other melodic European hardcore bands like Inner Conflict and Post Regiment. The band departs from the La Fraction mould with their less stylized lead vocals, more pronounced harmonies, and a layer of somberness that gets me all excited. The pop sensibilities and melody will compel you to spin this thing over and over, but there's enough punk grit to keep your crust-credentials intact. Listen; become addicted; then track down a copy of their LP released on Alerta Antifascista (You can also get these tracks on a CD along with a lot of other material here or here).

this band reminds me of all the 90s female fronted punk/crust mixed into one band for some reason, mainly harum scarum and contravene.