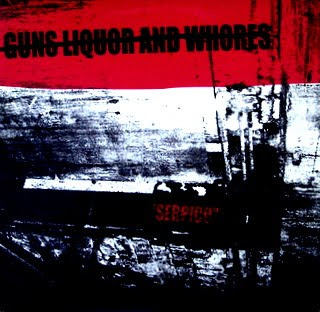 No, the title of this post is not a feeble attempt to get your attention, but it does sound like a fun Friday night. Guns, Liquor, & Whores was actually the previous band of three future members of Manitoba's Under Pressure. Those of you familiar with the latter band from their "Still No Future" 12" on Sound Pollution are bit more prepared for the abomination at hand: raucous fast(hard)core glued together with thick feedback and some hilarious film (?) sound samples (from a movie that I'm ashamed to admit I cannot identify). The nine originals would be enough to make this 10" a smokin' hot affair, but then there's a cover of Turbonegro's "Hobbit Motherfucker" and a blazing mad version of Infest's "Sick (Fuckin')-O" (remember how they tore apart those Void/Faith songs on "Still No Future"? Yeah, it's kind of like that!). A lot of you out there eat up the fast stuff I've posted in the past, so I'm pretty certain you'll like this one too.

GL&Ws didn't release anything else that I can find. I was bummed to find out Under Pressure quit, but they did leave behind 4 really good 12"s and some EPs, many of which are available still. They slowed things down a bit on later releases, but the quality seemed to get even better on the last couple of outings.

i will love and treasure this one

These guys were on the Heresy tribute comp. "Dedication from Inspiration" with one of the better renditions - a sick version of Follow Suit. Thanks for this one... that cover was all I had but made me want to hear more.

Vengeance and Jimmy: Good to hear that you guys like this one 'cause I feel like I've been hunting it down forever!

Malisha- Yeah, some smack would certainly crank up the shock factor.

Or maybe it's the title of Jarod Diamond's next book about how European access to guns, booze, and cheap sex lead to imperial domination. Or maybe not.

Mike- I need to check out that comp! A lot of tributes are lame, but a Heresy one sounds worthy enough (especially with a GLW track!)