The Battle For Seattle 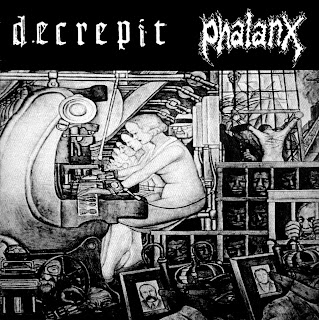 Here's another excellent Brandon pick from two unstoppable Seattle bands. Decrepit should need no introduction, and surely, just listening to their take on crusty hardcore is the best way for newcomers to get acquainted. The incessant, rapid-fire vocals are easily the band's greatest virtue. They released a 7" and a self-titled CD that I know of, both of which are/are probably completely awesome. Phalanx also released a self-titled LP/CD, and then called it quits, leaving this split 7" as the only other artifact of their existence. Their sound will inevitably be cornered as Americanized Scandi-crust galore, with bad cop/badder cop vocals. I remember liking their LP more than I like these tracks, and from what I can tell both Aborted Society and No Options records are sold out of it. Being a low profile band, it should be easy to find a copy in one of your favorite distros (the Phalanx tracks below were tacked onto the CD version).

Thanks alot man...its fucking great to hear this again....Decrepit still fucking blows me away! I have a live tape from off the board at some basement show in Portland with my buddys band Axiom that Ill try to find...Cheers -Brandon

Great split here! This logged some serious rotations on the turntable. DECREPIT were Fuck'n killer

This was one of the first records I bought when I first got a turn table. It came with a nice poster which I believe all Un-Yelliman releases do. I'm surprised this is now out of print.

the only decrepit release i dont have thanks! that being said anyone got a spare copy?

Hey, thanks for sharing/commenting everyone!

Brandon-- definitely keep us posted about that tape. If you find it and need help ripping it, send me an e-mail. Also, some Obliterated posts are on the way!