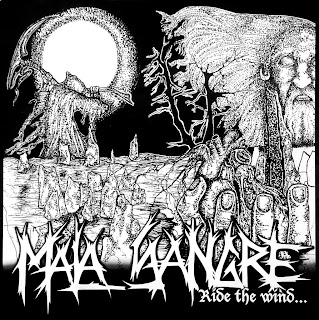 Flipping through the myriads of black and white covered crust records can be daunting. Which holds the hidden treasure? And which of them are just stale d-beat? My advice-- don't pass up on El Monte, California's Mala Sangre. These guys play stench-core that could easily last multiple rounds in a cage match with Hellshock or Stormcrow. They're still around and gigging, and hopefully will release some more great tunes in the future. For now, enjoy their dirty, crusty two song 7", "Ride The Wind..."

"Ride The Wind" by Mala Sangre (released in an edition of 450 copies by Threat To Existence Records)
Posted by Batguano at 11:00 AM

dude, you should have been member of 7inchcrust blog :)
i didn't know Mala Sangre, thanks for posting the 7", this is excellent stenching crust

It is most disturbing seeing these guys live, since the overweight guitarist/scene kid like's to play on stage in his underwear. The singer is also in the band Mundo Muerto, which has a more basic punk rock sound.

Hello my friend.
Your blog is very good and admired by us.
We also have a blog (www.lagrimapsicodelica.blogspot.com) for four years, with 9000 hits daily.
And recently, we opened an online radio station, called Radio Web Lágrima Psicodélica Underground, which is broadcasting the rock and roll, 24 hours / day.
So we're inviting her to join us in the transmission of our radio website.
If interested in our radio broadcast, I ask that you contact us via email lagrimapsicodelica@gmail.com.

The link below is a description of the partnership between the radio, blogs and websites.

If you wish to place the link and the player of Radio, consult the following link:

Insaniac- That is pretty disturbing. I think the "scene-kid" description more so than the over-weight part. Once I get that image out of my head, I still like these songs a lot. I'll have to see about Mundo Muerto, now. Thanks.