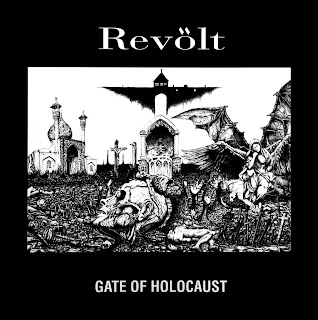 Open Revölt's 6 song LP, and you're greeted by the band member's photos. Here they pose in a forest, the Drummer and Bass player donning some serious metal spikes and panda-faces collectively, and chainmail and bullet sashes respectively. Oh yeah, they both brandish sabers too. Then there's the guitar/vocals guy standing on the shore of the lake, but looking like he just got back from a Battle of Disarm show. At first you might think these guys are not yet sure what they want to be, until you hear the first riff. Then it becomes clear: we're in old-school, stench-ass crust territory! The tempos crawl and the guitar chugs along at a nightmarishly hypnotic pace, and if it weren't for those simple yet kick-ass riffs, I'd say the songs were a bit too long and undynamic. They pull it off damn well, though, especially on side A, and certainly with help of the double bass drums which bring a bubbling-under-the-surface intensity to the tracks. Check it out if you're a fan of Axegrinder, later Amebix, or Coffins. Only 500 of these were pressed on Awesome Moshpower Records (the Japanese have such a way with words!). The label also points out (correctly) that there were a lot of pops/clicks on this pressing. I deleted as many as I could, but could only do so much.

You might be able to get a CD-r with live and demo stuff here.

yea its very unfortunate that record has so many clicks and pops i think i have only given it maybe 2 spins? thanks for a cleaned up rip!

You're most welcome, sir!