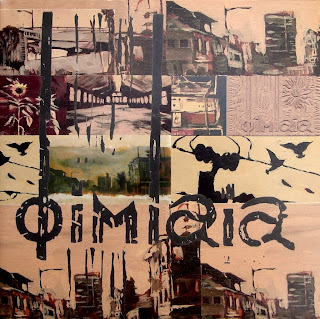 Some more haunting melodies here to usher you into to the fall. Dimlaia got compared to Neurosis, etc. a lot, but I suspect that was due to a lack of any truly similar band to compare them to. In addition to the creeping pace of their music, Dimlaia's sound is defined by gorgeously tenuous guitar lines that seem to break apart at a mere gust of wind, and which afterward reconverge only to crumble again. It only takes a listen or two to know that this cycle is carefully orchestrated, although it gives the impression of randomness or improvisation. Overlaying the arrangements is an ambient shroud of autumnal melancholia, which should be ventured cautiously by those prone to moodiness. The band also avoids the trap many heavy bands these days fall in of getting too indulgent with their song lengths. "Hide The Sun" is an excellent example, packing in an epic's worth of power into a mere three minutes, and allowing the music to do most of the communicating.

Dimlaia featured Carl Auge (original bassist for HHIG) who also painted the art used for the cover (as well as the cover for their split 10"). Life Is Abuse Records still has copies of the Dimlaia CD as well as the Drain The Sky EP (ex-Dimlaia). The above mp3 was ripped from the Stonehenge Records vinyl version of the album.
Posted by Batguano at 9:51 AM

I mean, I love the component sounds of a lot of moody post-whatever, but also have the attention span of a squirrel, so I appreciate a band that gets to the point.