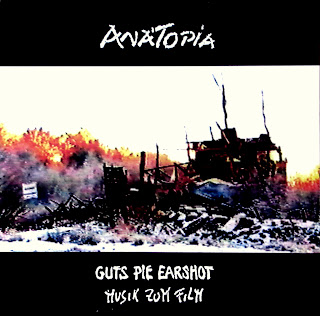 In my conscious effort this week to mix in some variety, Guts Pie Earshot seemed an obvious choice, and indeed the textures on the "Anatopia" LP also meld nicely with the autumnal moods of some recent SOTW selections. Guts Pie Earshot answer the hypothetical question few would think of asking: what would happen if a few squatter punk music students with diverse tastes threw all inhibitions and genre limitations aside and wrote some songs? The answer turns out to be as kaleidoscopic as you'd think, and "Anatopia" is a shape-shifting color palette of some of the possible outcomes. Their colorful diversity comes through not only from record to record, but from song to song on this LP. The band's music is driven by bass, drums, and cello with occasional appearances by other keyboard and string instruments, and their early recordings were graced with robust vocal melodies (by Anneke). This is indeed one of those earlier recordings, although the vocals are absent or subdued on many of the tracks. From funereal dirge, to Eastern European folk, to punk, to an awesome cello waltz... this one really shows the astounding array of this band's influences and abilities. It's also apparently a soundtrack to a film (which I haven't seen), presumably about the squat of the same name (?). Any more info about the film would be much appreciated. For more GPE, try this record too-- it's excellent!

The band is still around and plays mainly as a two piece, however the flyer at their site advertises a reunion with Anneke! Wish I could be there. I have a couple of other GPE LPs if there's one that you're missing.
Posted by Batguano at 8:14 PM

hell yea been wanting to hear this one for a while. linked this post to my post as well

Hey thanks for doing that. Enjoy!

awesome, thanks! this is one that i didn't have.