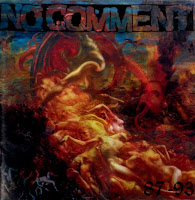 Along with Crossed Out and Infest, No Comment comprised the unholy trinity of early modern So-Cal powerviolence (or fastcore, etc... honorable mention goes to a bunch of bands like Neanderthal... ). I mean, these bands pretty much wrote the manual on how it's done, and no band has yet to eclipse their greatness in the genre. As the title of No Comment's discography LP/CD, "87-93," suggests, the band tore shit up during the same period that Infest reigned. Having only released EPs and Comp tracks, they've remained relatively neglected over the years (although I'm sure there's a legion or two of devoted fans out there). The CD I've ripped for today's post contains all of NC's studio output (including their demo which was later released as an EP), as well as a ton of live material. The LP version was released by Deep Six Records and is sold out, and the CD version (presumably sold out?) was released, I believe, by the vocals man, Andy (later, vocalist for Man is the Bastard). Until someone decides to make this material available again, here are some 256 kbps rips. It's a big file, but this is both a big chunk of history, and 100 mb's of ear-blistering awesomeness!

Thank you! I am sooooooooo looking forward to this!

I already had this but it's nice to see it posted. Such an important part of hardcore history wrapped up in this band. It's funny because 87-93 were the exact years I was in college.

Wooderson, I'm sure you won't be disappointed, and Anonymous, I completely agree!

Justin, I'm not surprised you already have this since you listen to great stuff. It seems that while you went away to college, LA was going OFF!

My point exactly, I leave LA and then these bands really start taking off. The only band in even a similar vein that played Humboldt was the Capitalist Casualties. They were awesome musically but pretty jerky as people. oh well

Oh crap, I hadn't noticed that (not much into death metal)! I wonder if the band/label knew this. I would think, though, that "Treasures of Satan" is more appropriate for a Morbid Angel cover!