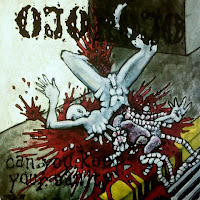 As some of you may know, dark crust-core with witchy female vocals is my kryptonite. I'm positively weak-kneed over that shit. Throw on some Zero Hour, Unhinged, Jeniger, Dearborn SS, or Initial State and I'm a docile zombie, ready to do your bidding (or that of the vocalist). Which brings me to today's overlooked and completely awesome band, OJOROJO. Those of you wise enough to have downloaded the "Shit Gets Smashed" comp a while back have read the prologue to this band's dark tale. The above description and comparisons pretty much tell the rest, but you should also know that members previously/currently play(ed) in Grimple, Econochrist, Talk is Poison, and Brainoil, and the incredible vocals-woman screamed for a similarly great band called Multi Facet (also on the "Shit Gets Smashed" comp... Post on their 7" coming soon). As far as this sub-sub genre of hardcore goes, OJOROJO deserve to be regarded as one of the best. The band only released one full length, "Can You Keep Your Sanity," (East Bay Menace Recs.) consisting of 14 scathing crust blasts. I think you'll like... (click on the song in the singingbox for a preview). 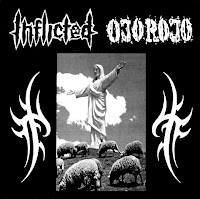 As a bonus, in the folder below you'll also find OJOROJO's split with Wisconsin band, Inflicted. Unfortunately, OJO recorded these two tracks without Jenean on vocals, but they are still good and it's nice to hear these guys working out their sound. Inflicted were a great choice to share this split. They resemble the Bay Area bands OJO rose up around (El Dopa, etc.) and completely shred (perhaps better than OJO on this record)! If anyone has info about Inflicted, you know what to do...

i didn't know them, nice band. pissed off and brutal crust. excellent choice as always

Mr. Guano, I tried to leave a comment yesterday and got some kind of blogger error. Strange. Another awesome post from your archives. Dearborn SS is still my favorite, but I didn't waste any time downloading this one. I really liked being able to preview a track on that singingbox thingy. Is that new or do I just not pay enough attention to what's going on? Thanx again for this one.

Billy, I'm not surprised that you like this. Great shit!

Justin, yeah blogger can be a real pain sometimes, but hey, it's free. The "Thingybox" is somewhat new. I like it too since a lot of the stuff I post is unknown to most visitors, and you know people, they're not always open to trying new things...

You're very welcome x3!!! That must have been a memorable experience seeing Ojo live. The LP is now a personal favorite of mine too. Don't let these tracks get away from you again!

I can't believe I have to get this again. I must be on my fourth copy by now. I just found the CD not long ago and bought it again. Now it's stolen, and the tracks got screwed up when I converted them from wav to mp3. I'm glad you're here, and you've got this copy up. Thanks, I hate to live w/o this in my rotation.