It's Hittin' The Fan Now! 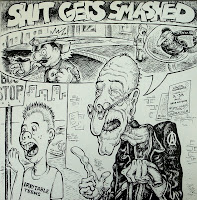 The Bay Area hardcore stuff I've been posting doesn't seem to be getting much download love. Maybe people out there don't realize how good it is! There's nothing like the "Shit Gets Smashed" comp. (East Bay Menace, 1995) to reveal that goodness! On this bastard you'll receive a veritable 40 oz. of dirty and/or crusty hardcore that evokes some serious punk rock inebriation, and which will leave you dizzy by the curbside, wretching your guts out by the end. If you love Grimple, Econochrist, and Filth... then I highly recommend this to you (even though those bands don't actually appear on this thing). I also recommend "SGS" if, like me, you're a sucker for female-fronted dark crust along the lines of Zero Hour, Unhinged, Jeniger, Children of Barren Wasteland, etc.

Multi Facet - This band and OJOROJO (see below) shared the same singer. Both bands played awesome dark, crusty hardcore like the bands mentioned above. Some members also played in Grimple, Talk is Poison, El Dopa (1332), etc.

El Dopa (aka 1332) - Great dark and menacing hardcore. They had a name change and put out a 7" on Prank Recs and have an early discography CD available on Tee Pee Recs.

Apeface - Great modern hardcore band. On these early tracks they sound like a mix a Filth and Econochrist. For a more emotive and "mature" Apeface, visit here.

Masterbaiter- Darker hardcore than their name would suggest. Good stuff, not unlike El Dopa, etc.

Hot Rod Shopping Cart pretty much morphed into The Demonics. I have this comp. Reminds me of a very specific time in my life, a time when I did waaaay to much speed.

Ah, meth breath. It seems to have been epidemic of that time and place... I'll be on the lookout now for The Demonics (a very wise name change by the way).
Thanks.