The Unholy Princes of the Split 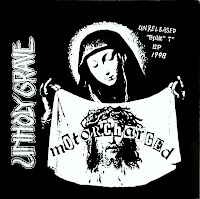 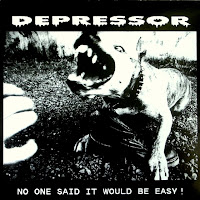 We finish up this noisy split-week with the runners up in the race for split EP proliferation: Unholy Grave. These far-east dudes can always be relied upon for raw, yet unpredictable grind/hardcore. This split presents six roughly recorded UG tracks; supposedly they were recorded live in 1998, but the only actual "live show" recording seems to be the unlisted sixth track. I've heard mention that the band has somewhat dubious stances on certain current issues in the world. At least one track backs up that notion: "Just Another Terror?" Here the band rants that terrorists "Must be stopped!!" However, they don't mention at what price this stoppage is to be carried out. Isn't there enough fear-mongering in the mainstream?

Anyway, Depressor is a band I can completely sink my hooks into! These east-bayers shroud themselves in a bit of mystery-- releasing their records in small quantities, and generally not using much pomp in their "self-marketing." I kind of respect that, but I also think a lot more people out there should check these guys out. Depressor plays "Amebix-crust," and started even before the huge Nor-Cal/Pac-North West stenchcore revival. The band was first called Charger, and then gathered more troops and renamed. The recordings on this release are definitely from their more crusty era (they are heading more in the direction of early death metal these days). Tempo-wise, the band is not fast or slow, but every second of each song is heavy with distortion and rage, conveying the desperation cum defiance of their lyrics. All the songs in some way reflect the human desire to break free from the imposed order of things, but for me "Mold" hits home the hardest. This one explains how traditional forms of education systematically kill our creativity and only prepare us for life as a functionary in the profit machine. Original? No. But it's powerful in its stark presentation and in its stripped-down honesty-- the theme song for the paradox that is my life...
Download
"A Reality that's infinite
And yet they're telling us how to think
Creativity is kept on a short leash....
Many hours a day of mindless drudgery
Is training for what will be the rest of your life"
from "Mold" (Depressor)
Note: I wasn't sure where exactly the track "Subsystem" begins, so I did my best to estimate (it runs together with the previous track). Also, I put Depressor's heavy and noisy cover of "Largactyl" on this mixtape.
Posted by Batguano at 8:58 AM

yes there is this shit of UG about death penalty or "terrorism", really weird stance indeed..but it doesn't seem to bother all these bands that share the other side of their split ep's..
thanks for this anyway, :)